To be ‘Polite’ Meant Knowing the Rules for Proper Courtship 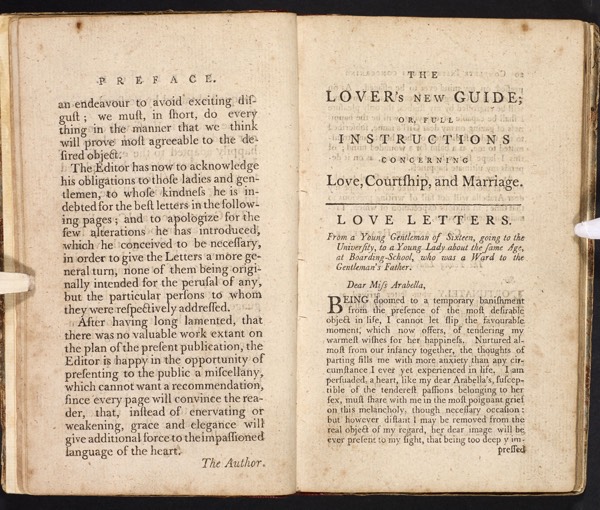 Here is a work that sounds as if it should should be essential reading for all those whose fancy lightly turns this spring to thoughts of love. I found it advertised in The Norfolk Chronicle for April 22nd., 1780.

New Little Work, necessary to be perused by every young Man and Woman in the Kingdom. This Day is Published, Price 1 Shilling. Embellished with a beautiful Frontispiece, elegantly engraved, THE LOVER’S NEW GUIDE, or a Complete Library of Love, Courtship, and Marriage; Whereby every part of those laudable, and really important Concerns, is rendered perfectly easy to all capacities: Under the following heads;

I. Love letters in a great variety of Forms, calculated for the Use of Persons of all Ranks and Conditions of Life.
II. Conversations on the Subjects of Love and Marriage, equally interesting to Parents and Children.
III. Cards of Compliment proper to be used in courtship by Lovers of either sex; and suited to all the Emergencies in Life.
IV. Love letters in verse; and a Variety of other Poems and necessary Particulars on the important subject of Love and Courtship.
The whole tending to direct and guide the youthful Mind in one of the noblest and most engaging of its Pursuits; and to lead to Happiness through the Paths of Virtue.
By Mr CHARLES FREEMAN, and others.
London; Printed by ALEXANDER HOGG, No. 16 Paternoster Row, and sold by all other Booksellers, etc in Great Britain and Ireland.

This New little Book, which is appropriated solely to the above laudable purpose, is by far the completest Work on the Subject ever published, and will be found of the utmost service, in removing those disagreeable embarrassments under which many persons labour in making proposals of an honourable nature.

The British Library has in its collection a similar book dating from around 1780 and called The New Lover’s Instructor. It also contains template letters, compliment cards and fictional dialogues on the subject of love, as well as love poems and riddles.

Given the highly structured and formalised ‘rules’ for courtship in the Georgian period, it’s easy to see how useful such a book of guidance could be. Courtship was expected to move along prescribed paths of etiquette towards the ultimate goal of marriage. Along this path, letters were essential ‘markers’ of progress.

In Jane Austen’s novels, such letters figure on several occasions, sometimes in ways that are matched exactly by the fictional characters in books of instruction like this one, or the Lover’s New Guide. For example, when Mr. Collins is turned down by Elizabeth Bennett, he tells her he chooses to interpret her rejection as ‘your wish of increasing my love by suspense, according to the usual practice of elegant females.’ While we may smile at his pompous obtuseness in not taking no for an answer, we might also reflect that what he is doing may be not so much mistaking Elizabeth’s meaning as assuming she is somewhere else in the ‘script’ he is following!

William Savage lives near the beautiful North Norfolk coast in Eastern England and writes historical mystery novels, set in Norfolk between 1760 and 1800. The first book in the series, “An Unlamented Death“, appeared in January 2015. A second book is now in its final stages and will be published later in Spring 2015.

Will is also a local historian. In that guise, he researches topics relevant to the general period of his historical writing, gives talks to local groups and societies and is a regular volunteer guide at a nearby National Trust property. He finally has time for doing all this now he has retired.

Author of mystery stories set in Georgian Norfolk.
View all posts by William Savage →
This entry was posted in Georgian Society. Bookmark the permalink.
Loading Comments...
%d bloggers like this: