The Complicated Lives of the Poor: Seeking a Living 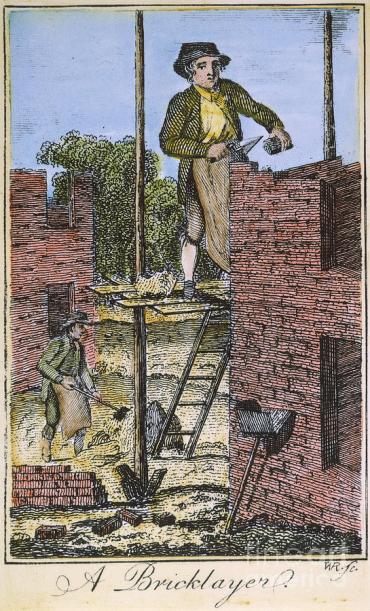 In a previous post, I explained the demands of the 18th-century English Poor Laws. I also mentioned how I came on a locally-printed booklet of transcripts of records made by magistrates taking depositions under the Poor Law in Holt, Norfolk[1]. This post looks at what can be learned about how some people tried to earn a living in difficult times.

To my surprise, what I found revealed quite a complicated picture. I tended to assume the lower classes lived humdrum lives, played out in and around the villages or towns where they were born. That seems to be a long way from the truth. Many travelled widely in search of work or adventure. There was a far more mobile workforce – and a much more flexible attitude to the organisation of work – than I had expected. Ordinary people seem to have done whatever they wanted, pretty much regardless of the consequences.

Someone who had been an apprentice or learned a useful craft shouldn’t need to worry about establishing a ‘settlement’ under the Poor Laws. Yet it’s clear many did. The old apprenticeship system was starting to break down. The twin pressures of industrialisation and economic instability forced change. Craft training was escaping the control of the guilds. Many people couldn’t afford the premiums charged by the guild masters. Instead, they sent their sons to learn from relatives or people they knew.

As a result, many young lads served a variety of quasi-apprenticeships. They made false starts, changed their minds and tried again. Other took to the practice of ‘clubbing out’: working under a skilled man to learn a trade, but finding their own accommodation and meals. So long as customers and employers were willing to use craftsmen who had not served a full, seven-year apprenticeship, this practice was bound to continue.

John Frost of Holt, who was 54 in 1790, started work aged 10. At first, he was a typical ‘Ag. Lab.’ – the kind of casual agricultural labourer so many people find in their family trees. Then he tried his hand working for a local butcher. At age 13 or 14, he approached a blacksmith in a neighbouring village to learn that trade. The man turned him down as being “too small and weak”. Instead, Frost worked as a bricklayer with two of his uncles, one locally and one many miles away in Ipswich. He seems to have fallen out with each of them after a time, so “worked as a journeyman up and down the country in various places”.

Agricultural worker, butcher’s boy, rejected blacksmith and bricklayer. All before he was 16 or 17 years old.

It’s clear Frost was accepted to do journeyman work, even though he had never served a formal apprenticeship. He must have continued doing it for some time, since his next statement refers to him, aged 24, marrying a girl in Neatishead in the Norfolk Broads. That’s at least 35 miles distant from his original home in Holt. He must have been doing quite well too. Not only could he afford to marry, he rented a house in Irstead, a few miles away, for 40 shillings a year.

The parish authorities in Irstead were wary and demanded that Frost should get a ‘certificate’[2] from Holt. Holt agreed to this without argument and it served to allow the family to stay in Irstead for several years. After that, they returned to Holt where Frost started a business as a house builder.

At about this time, aged around 30, Frost seems to have been seized with wanderlust. Perhaps it was caused by the death of his first wife. He put his two young daughters[3] “out to board” and took off for London. There he worked as a journeyman (he does not say what his trade was) for some 4 years.

In 1781, now aged around 45, he married again, this time a widow living in Kent. First they lived in Sheerness, on the Kent coast, then they went back to London.

He had two further children, both born near Blackfriars in London. Again, all seemed to be going well. The family lived in Southwark until some 18 months before his appearance before the Holt magistrates.

Suddenly, and with no reason given, he left his second wife. Did she throw him out? Did she take a lover? We don’t know. All the records tell us is that she stayed in the home in Blackfriars.

Frost now brought himself and his two young children, a boy and a girl, to Costessey[4] on the outskirts of Norwich.

Perhaps Frost’s sudden return to Norfolk was associated with him suffering some injury. Although he had lived and worked in London for a good few years, he never did anything to earn himself a ‘settlement’ in any of the parishes where he lived. According to the strict demands of the Poor Laws, the only place which might offer him relief would be Holt, back in Norfolk. Yet he went to Norwich.

He must have been quite badly injured, or suffered a bad infection, because he spent 14 weeks in the Norfolk and Norwich Hospital “to be cured of a bad sore leg”. That institution, which had been built in 1771, existed only to serve the poor who couldn’t get treatment any other way. Frost said he “got a recommendation” to the hospital. This implies he knew someone (perhaps his brother-in-law) who could persuade them to take him in.

Maybe Frost was altogether too happy in the hospital, for they “turned him out as cured”. This sounds more like the removal of a malingerer than the discharge of a genuine patient. He must have left his poor children all this time with his brother-in-law, for he went back to Costessey. He still seems unwilling to return to his wife living back in London. Even if they had decided to part, why did he bring his children? He had no means to look after them. All this time, apparently, his brother-in-law cared for them.

Finally, even his brother-in-law, who seems to have been a long-suffering chap, had had enough. Frost and his children set out for Holt at last – a journey of some 20 miles which takes them all day. There, as is only to be expected, they end up in The House of Industry – the Workhouse.

Making Sense of it All

I’ve explained the various incidents of John Frost’s life for two reasons. First to show just how mobile and complicated the lives of the 18th–century working class could be. Second to let each reader make up their own mind about this man’s story. Is he a man gradually worn down into poverty by events and sickness? It can certainly be read that way. Was his povertymostly his own fault? Was it born of his unwillingness to stick long at any trade, his low level of skills or his wanderlust?

Studying history often offers perspective on contemporary events and controversies. We are far from being the first generation struggling with ‘welfare’ issues. The Georgians too wondered how to help those who fell on hard times though no fault of their own, without encouraging the feckless and lazy. We may not like their solution, but we should understand their real dilemma.

Independent researcher and author of mystery stories set in Georgian Norfolk.
View all posts by William Savage →
This entry was posted in Commerce and tagged Employment. Bookmark the permalink.

1 Response to The Complicated Lives of the Poor: Seeking a Living