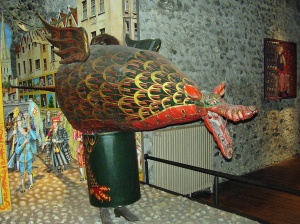 The museum in Norwich Castle holds a strange model dragon, larger enough for person to get inside and carry around, snapping the jaws at people. What was it for? Then, on the northern outskirts of Norwich, to one side of the Ring Road, is a pub called “The Whiffler”. I have often wondered what on earth this odd name meant. In fact, both refer to the same event: the Norwich Guild Day, held on St. George’s Day in April.

Thanks to this entry in “THE VOCABULARY OF EAST ANGLIA; An Attempt to Record the Vulgar Tongue of the Twin Sister Counties, Norfolk and Suffolk, as it existed in the last Twenty Years of the Eighteenth Century”, written by Rev. Robert Forby and published in 1830, I understand who the Whifflers were.

WHIFFLER: one who goes at the head of a procession to clear the way for it. In that of the Corporation of Norwich from the Guild-hall to the Cathedral Church, on the Guild-day, the whifflers (for they are so called) are two active men very lightly equipped … bearing swords of lath or latten, which they keep in perpetual motion, whiffling the air on either side, and now and then giving an unlucky boy a slap on the shoulders or posterior with the flat side of their weapons.

The Whifflers wore scarlet satin breeches, white satin jerkins and hats decorated with a cockade of feathers and ribbons. The procession also contained men known as ‘Dick Fools’, who were dressed in painted canvas coats and red and yellow cloth caps hung with fox or cat tails and small bells. It must have been quite a sight![1]

The Guild of St George, one of the most powerful and wealthy mediaeval guilds in Norwich had started this annual procession for their Guild Day – on St George’s Day, 23 April. As well as figures of St George and Margaret, the maiden he rescued, it featured “Snap” the dragon. One of Snap’s incarnations is still on show in Norwich Castle Museum. This large puppet was carried around, taunting the crowds, with its wings flapping, jaws snapping and smoke shooting from its mouth.

In time, Guild Day merged with the swearing-in of the city’s new mayor and the procession became a grand civic occasion.

Tuesday last the Mayor Elect accompanied by the Court proceeded from the Hall to pay their respects to the Mayor at his house in Surry-street, where being regaled with wine and cakes, they returned to the Guildhall, and from thence preceded by the City Band and Regalia, attended divine service at the Cathedral, where an occasional sermon was delivered by the Rev. Mr. Peele. … After which they went in procession to St. Andrew’s Hall where an elegant entertainment was provided for a numerous company, amongst whom we distinguished most of the principal families in this city and neighbourhood. … The Assembly in the evening exhibited a display of beauty and elegance, and the happiness of the day was as complete as the sincerely-lamented indisposition of the Mayoress would permit, whose absence was softened by the politeness and affability of the late Mayoress, who presided through the day. (Norfolk Chronicle, 20 June, 1789)

Benjamin Mackerell, writing in in the early years of the 18th century explained:

The Dragon, carried by a Man in the body of it, gave great diversion to the common People: they always seemed very much to fear it when it was near them, but always looked upon it with pleasure when it was a little distance from them.

It’s too long to quote in full, but the gist is that Snap bemoans his long “captivity” in Norwich Castle and is released by the sudden, miraculous intervention of St. George himself, leaving a substituted, inferior dragon to take part in that Guild Day’s procession! Here’s the last verse:

Wantley’s fam’d dragon at his call attended: —
Suddenly their [sic] pinions gave a hideous flap,
And screaming loud they swift through air ascend’d,
Leaving the city to lament her SNAP.

Wantley was presumably the name of the maker of that version of Snap, which was either to be replaced or was missing.

There then followed a much shorter poem on the same theme, this one suggesting that the celebrations were somewhat more austere than usual and that Snap might indeed have been entirely absent:

Lines written on the GUILD-DAY,
Occasioned by the absence of Snap.

Our careful Chief Magistrate, punsters will say,
On our mouths means a padlock to clap;
Since he not only robs us of dinner today,
But even denies us a SNAP.

It seems that cuts in local authority expenditure have a lengthy history!

Independent researcher and author of mystery stories set in Georgian Norfolk.
View all posts by William Savage →
This entry was posted in C18th Norfolk. Bookmark the permalink.

2 Responses to ‘Snap’ and The Whiffler