Georgian Travel: Falling off your Horse 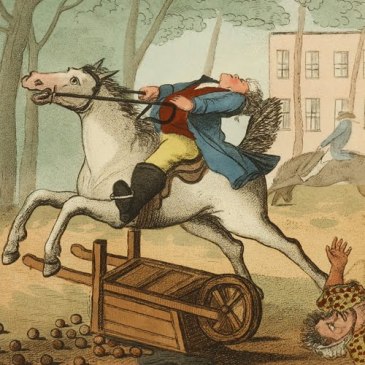 One of the commonest problems facing travellers in the 18th century was staying in the saddle. Considering how much some of them must have ridden, this is odd. Nevertheless, people seem to have fallen off their horses with suspicious regularity, as Mary Hardy’s diaries show. Still, horses are nervy creatures and easily frightened by anything unusual.

It is also obvious – if only from how often reports stress that the victim was sober – that alcohol played as great a part in travel accidents then as it does today. People who had been to market had probably spent a good deal of time in pubs and ale-houses with their friends! In my own youth, when livestock markets were still held in the centre of the city where I was brought up, the pubs were crowded to the doors on market days.

The other thing worth remembering was the darkness. If you travelled late in the evening – perhaps returning from a play, an assembly or a ball – the only lighting would be whatever the stars or moon supplied. No powerful vehicle headlights! Even the public coaches only carried flickering lamps, useless for illuminating the way ahead. Many of the falls mentioned in the diaries seem to have happened during darkness.

“I Bath’d. Raven [her son] got a fall from his Horse, got no hurt but rent his Coat…”

Later, in May, 1788, she notes another son’s mare “… fell down with him & cut her knees very badly …” The lad was apparently unhurt.

The Lound family (some of them Mr Hardy’s workers or tenants) seem to have been decidedly accident prone. We saw earlier in this series how one had his thigh crushed by a cart. Now, in August 1792, Mary notes that Valentine Lound was killed by a fall from his horse coming home from Cawston Sheep Show “… being very much in Liquor.”

In February 1784, a Letheringsett man returning from Wells-next-the-sea fell into a lime pit in a snowstorm and lost his life.

May 24, 1794 A Mr Smith of Blakeney was killed going home from the market. He “… fell from his horse in a little run of Water in the lane going from Holt to Cley.”

Luke Basham, the harnessmaker of Holt used by Mary’s husband, was killed September 10, 1801, by falling from his horse – the news report in the Norwich Mercury carefully noting that he was “perfectly sober”. Still, he either died from the fall or from exposure by lying out overnight – maybe not too likely in September – since some labourers going to harvest found his body lying in the road next day.

Here, to finish, are some extracts from The Norfolk Chronicle which show some of the more unusual accidents connected with horse (or ass) riding.

One day last week Isaac GROSLIN, a lad about 15 years of age, servant to Mr DAVIS, of Dedham, in Essex, after rolling a field and leaving his roll, hooked the trace to the horse, and in getting up to ride home missed his hold, was entangled with the trace, and the horse taking fright ran through a gate, and more than a mile home, dragging the boy, who was the most shocking object that could be imagined, having hardly a bone that was not broken.

Wednesday night last, as Mr Clare WEGG, of Surlingham, was riding a young colt, he was unfortunately thrown by him, and his foot hanging in the stirrup, he was so violently bruised as to occasion his immediate death.

A few days ago, a lad about twelve years of age, at Upton, near Southwalsham, riding on an ass without a bridle, the ass went between the sails of a mill, which struck him on the head and fractured his skull; he languished a short time and died.

Tuesday last, as John Cook, servant to a farmer at Frettesham, was riding through Catton, he fell from his horse, and a loaded waggon passing at the time, went over his thigh, and dislocated his hip.

Cozens-Hardy, Basil. The History of Letheringsett in the County of Norfolk. Norwich: Jarrold & Sons Ltd, 1960.

Independent researcher and author of mystery stories set in Georgian Norfolk.
View all posts by William Savage →
This entry was posted in Travel. Bookmark the permalink.

3 Responses to Georgian Travel: Falling off your Horse