Carry on ‘Camping’ in Norfolk 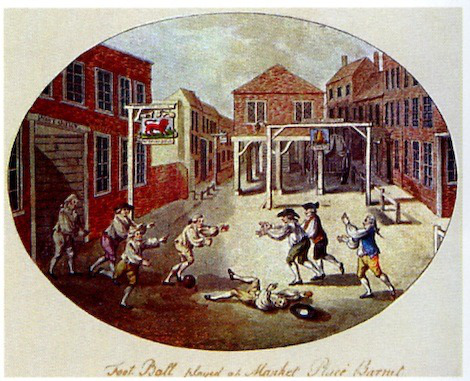 The old Norfolk game of Camping was already dying out in the 18th century, replaced by modern games like football (soccer) and cricket that required fewer players and were much less anarchic and violent.

All that we might have known about such games might have been confined to a few place names, were it not for certain zealous 19th-century antiquarians like Rev. Robert Forby. In his book “The Vocabulary of East Anglia”, he gives a detailed description of how Camping was played.

CAMP, s. an ancient athletic game at ball, now almost superseded by cricket, a less hardy and dangerous sport. Yet camping, though not so general, is still a favourite exercise in some districts of both our counties. The late Right honourable William Wyndham, scarcely more celebrated as a statesman and a philosopher, than as a patron of the “Sports and Pastimes of the English People,” … gave great encouragement to this sport during his residences in the country, and had many matches in the neighbourhood of his venerable seat at Felbrigg [near Cromer in Norfolk]. He was wont to say, that it combined all athletic excellence; that to excel in it, a man must be a good boxer, runner, and wrestler ; in short, a sort of ‘pancratiast’ [Ancient Greek for an all-round athlete]. Certainly, no kind of manly exercise can display to so much advantage the powers, proportions, and attitudes of a fine muscular frame. … Perhaps some varieties in the mode of playing it always existed ; and certainly it is now degenerated, and some meaner exercises unworthily usurp its name.

Of the sport itself, however, two varieties are at present expressly recognized; rough-play, and civil-play. In the latter, there is no boxing. But the following is a general description of it as it was of old, and in some places still continues. Two goals are pitched at the distance of 120 yards from each other. In a line with each are ranged the combatants; for such they truly are. The number on each side is equal ; not always the same, but very commonly twelve. They ought to be uniformly dressed in light flannel jackets, distinguished by colours.

But the exertion and fatigue of this is excessive. So the victory is not always decided by number of points, but the game is placed against time, as the phrase is. It is common to limit it to half an hour; and most campers, now-a-days … have in that time got enough of so hardy a contest. The spirit of emulation prevails, not only between the adverse sides, but among individuals on the same side, who shall excel his fellows. The prizes are commonly hats, gloves, shoes, or small sums of money.

That it was a rough game, sometimes not far short of a general free-for-all and fist fight, is beyond doubt.

Two goals are pitched at the distance of 120 yards from each other; in a line with each are ranged the combatants, for such they truly are, the number in each side is equal, very commonly twelve; the ball is deposited exactly in the midway; the sign or word is given by an umpire, the two sides rush forward, the sturdiest and most active of each encounter those of the other; the contest for the ball begins and never ends without black eyes and bloody noses, broken heads or shins and some serious mischiefs. [1]

Writing in 1823, Edward Moor [2] described what he saw as the typical version using “a ball the size of a common cricket ball” which the players caught and carried, passing it between them by throwing. For him, the variation that used a football was called ‘kicking camp’. It seems the usual versions of the game were played barefoot, because he writes of yet another version of the sport, played wearing boots and called ‘savage camp’.

In whatever version, camping was a contact sport which often became violent. There are no mentions of rules to govern how or when an opponent could be tackled to get the ball from him. Since the game could last for hours, and only a handful of goals be scored in that time, the players must have been hanging on to one another and struggling to get the ball for most of the time.

The contests were not infrequently fatal to many of the combatants. I have heard old persons speak of a celebrated camping, Norfolk against Suffolk, on Diss Common, with 300 on each side. Before the ball was thrown up, the Norfolk men inquired, tauntingly, of the Suffolk men, if they had brought their coffins! The Suffolk men, after fourteen hours, were the victors. Nine deaths were the result of the contest within a fortnight. These were called ‘fighting camps,’ for much boxing was practised in them.[3]

When the End Came …

It was probably inevitable that such a rough and dangerous game would gradually fade out of use. However, the descendants of camping may be more numerous that simply soccer and rugby. Australian Rules football and American football — so much more physical than soccer — both have something in common with camping.

This description of a mid-nineteenth century football game in a suburb of Melbourne, Australia, has a familiar ring:

On 31 July, a knock-a-bout match at Yarra Park was played between a “St Kilda scratch team” and “Melbourne scratch team”. Trees were used for goal posts and there were no boundaries and the match lasted from 1 p.m. until dark. There were no rules and fights frequently broke out.[4]

I also found this illustration of Yankee soldiers playing some version of football during the Civil War of the 1860s. To judge by the number of people shown as injured — and the fighting taking place — it seems likely to have been a game more like camping than any modern-day sport! Indeed, histories record that American football, in its early years, was an excessively violent game, leading to deaths and serious injuries every year. The violence became so bad that President Theodore Roosevelt threatened to shut down the game in 1905, should the rules not be changed to minimise violence.

Whatever its progeny, camping is no more. It faded away during Queen Victoria’s reign. In the end, tamed and limited, its place was taken by soccer and rugby, probably because those were deemed suitable to play in the fashionable public schools; and it is from such school and university sports that most modern games arose. So, the next time you see violence, on or off the pitch, at some football game, it might be worth remembering that it could have been far worse!

Author of mystery stories set in Georgian Norfolk.
View all posts by William Savage →
This entry was posted in C18th Norfolk. Bookmark the permalink.

2 Responses to Carry on ‘Camping’ in Norfolk