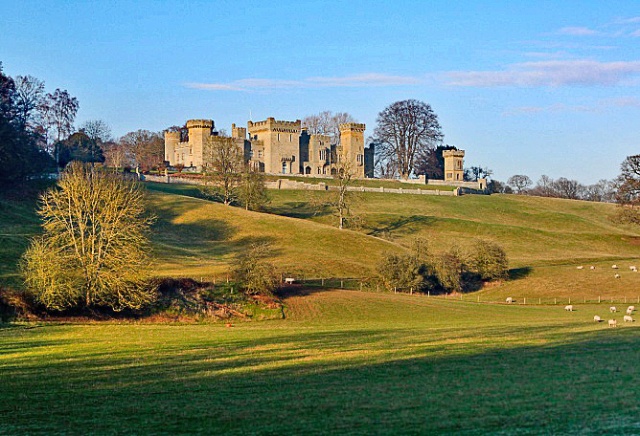 Everybody knows (hopefully!) that Downton Abbey is an imaginary place, crammed with romance, intrigue and angst and staffed by implausibly engaging servants. It is not, however, the only English ‘stately home’ called Downton—nor, to my mind, the most interesting one. That prize goes to Downton Castle, near Ludlow on the Welsh border: a magnificent ‘Gothick’ castle, now Grade-I listed, designed by its one-time owner, Sir Richard Payne Knight—a fascinating character to whom I plan to devote several posts.

Payne Knight (1750–1824) was both philosophically and artistically important and unjustly reviled, especially by conservative Tories and churchmen. He matters because he managed to exert his influence at a time when Britain was moving uncertainly towards attitudes prevalent today—and on which his thought and writing had a significant impact. ‘Janeites’ may be interested in the influence of his ideas on the plot of her novel Northanger Abbey. 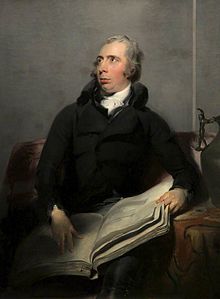 Payne Knight was a considerable polymath, even by the standards of the Enlightenment era. He was an antiquarian, philologist, numismatist and expert on classical Greek literature; a thoroughgoing Foxite Whig, a member of the Society of Dilletanti, a friend of Lord Byron and a patron of the arts and learning; and, not least, a free-thinking Deist, a philosopher of aesthetics and sexual symbolism and an extremely wealthy country gentleman. His enemies nicknamed him ‘The Pagan’ and his didactic poem, The Progress of Civil Society was labelled in the Anti-Jacobin as being “full of democracy and infidelity”.
Payne Knight rose from comparative obscurity to a life of wealth and privilege. His extensive learning was almost all his own doing.

Knight was born in Herefordshire to a family of the middling sort, not the upper classes. His father, Thomas Knight, was a clergyman. His mother was a servant girl, Ursula Nash. As a child, he suffered frequent ill-health and was therefore educated partly by local tutors, but even more by his own voluminous reading. Only later in his life did a large inheritance from his grandfather, a wealthy Shropshire iron-master, give him the means to travel, especially in Italy, and develop his interests in art and the ancient world in general. Since his travels coincided with the years following the discovery of Pompeii, it’s not surprising they had a profound influence on him. It was the iron-master’s lands and money which also allowed Knight to turn his ideas into stone and landscape at Downton Castle. It also paid for his outstanding collection of ancient bronzes, gems, coins and drawings, which were bequeathed to the British Museum, of which he was a trustee for the last 10 years of his life.

Knight’s Views on Building and Landscaping

The Knight family had acquired extensive land holdings around Downton Gorge near Ludlow, primarily to harvest timber for charcoal, which was the required fuel for early iron smelting. In time, coal and coke replaced charcoal, so the timber was no longer needed. It was, and still is, a spectacularly lovely landscape, combining stupendous views with the deep Downton Gorge.

‘The Picturesque’ became more than an aesthetic fashion. It affected the whole outlook of large groups of people.

Knight decided to build himself a house in this wonderful setting, and not just any house, but a castle. This was the time of Horace Walpole’s gothic novel The Castle of Otranto (1764) and the start of the Romantic movement. Payne Knight‘s castle would reflect both. Unlike the calm, symmetrical and strictly classical buildings then common, his castle, built between 1772 and 1778, was to be a confection of gothic and classical details, laid out on a deliberately irregular plan. It was to reflect the best of all worlds, arranged according to a new canon of aesthetics: ‘the picturesque’.

Maybe it was his travels in the rocky landscapes of Italy and the Alps that led Payne Knight to take against the calm, controlled landscapes associated with Capability Brown. He wanted something wilder, more sublime and thrilling. In his poem, The Landscape (1794), he mocked the ‘smooth’ style he saw as characteristic of Brown and his followers. The result was another intellectual wrestling match, this time involving Repton and another Herefordshire landowner, Sir Uvedale Price. That controversy became famous enough at the time to be satirised by Jane Austen in Northanger Abbey.

’The Picturesque‘ and ‘Gothick’ Romanticism

Knight wasn’t alone in seeing a sensible pursuit of pleasure as the purpose of life. He just chose his time badly.

Payne Knight wouldn‘t have been the man he was if he had stopped at using his wealth to build a house based on his own notion of style; nor would his influence have lasted as it has. What he set himself to do was produce a coherent philosophical basis for his aesthetic ideas, based on a sensibly regulated pursuit of pleasure in all its forms. Not surprisingly, to the conservatives, and especially the evangelical Christians of the time, this was tantamount to throwing down the gauntlet. Knight‘s most influential book, An Analytic Inquiry into the Principles of Taste was dismissed as decadent and pagan, even inflammatory. The pursuit of pleasure, however well-regulated, had no place in the evangelical Christian world view. At the same time, Knight’s Whig sympathies and parvenue background alienated the conservative Tories and the aristocracy.

Taste mattered in the 18th century. Displaying ‘good taste’ of the correct kind played a vital role in claiming the most desirable positions in polite society, even at a local level.

Nowadays, taste is seen as a matter for individual decision. In the 18th-century, this was not the case. It was a subject of intense debate, focused on a belief that ‘laws’ governing correct taste could be defined, much like the laws that were seen to govern the natural world. Alexander Pope, Horace Walpole, Edmund Burke and others engaged in intellectual ‘warfare’ on the topic of what made something ‘beautiful’, whether that was a painting, a sculpture, a house, a garden, a vista or anything else to which adjectives like ‘sublime’ or ‘inspiring’ could be attached. Knight’s contributions to the debate were as prominent as theirs. He also had the advantage of enough independent wealth to render him immune from being crushed by his opponents.

Why Did it Matter?

In a sense, of course, such learned, intellectual controversies were so much hot air expended by wealthy collectors over topics that only interested them. However, art and architecture were big business, even 200 and more years ago. The rich expended large sums on paintings and objets d’art. The rich built or renovated fine houses at enormous expense, surrounding them with gardens and vistas laid out in the most fashionable ways. It was vitally important to be sure your fine collection or your grand mansion would excite admiration from your peers, not see you condemned for revealing defective taste.

Aesthetics were all bound up with ethics and morals. Degenerate tastes proved a degenerate lifestyle.

It didn’t stop there. Aesthetic choices could be seen as ethical, even moral ones. As Payne Knight discovered, ideas on art or antiquarian interests could be interpreted as proving your real thoughts on a variety of topics. When Knight published a scholarly treatise (with illustrations!) on what he believed to be an ancient sexual cult of the god Priapus in the area around Pompeii, his enemies swiftly turned it into proof that his own tastes were equally pornographic.

It’s easy to dismiss all this as out-dated and trivial. That would be wrong. The true ethos of a period is made up of just such ideas, which filter down swiftly from the upper classes into the homes and choices of the middling sort. If we want to understand how the tough, science-based rationalism of the Enlightenment was so rapidly overtaken by the overt ‘spiritual’ emotionalism of the Romantic period and beyond, people like Richard Payne Knight are important pointers along the way.

If you do, you’ll enjoy these 18th-century mysteries set in Norfolk. Taking place in a time of unrest, revolution and almost constant warfare, they breath the spirit of an England coping with unprecedented technological and social change. While reformers were excited by Enlightenment ideas, conservatives, the established church and the aristocracy made desperate attempts to hang on to the status quo. Few eras have been as flamboyant in their loves and hates as Georgian and Regency times, which is why they exercise such a powerful fascination today.

Join Dr Adam Bascom and Mr Ashmole Foxe as they try, in their different ways, to bring justice and calm to turbulent times? Find out more here.

Independent researcher and author of mystery stories set in Georgian Norfolk.
View all posts by William Savage →
This entry was posted in Fashion, Georgian Society. Bookmark the permalink.

1 Response to The Other Downton