The Georgian View of Democracy 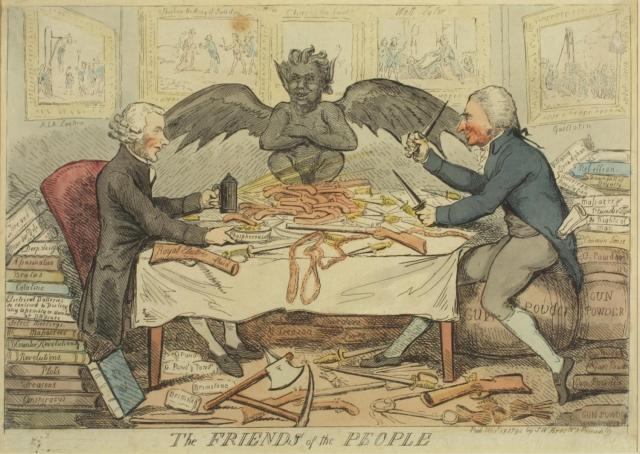 One of the greatest differences between political life in Georgian times and today was who was allowed to have a vote, both nationally and locally. In most modern, Western societies the most basic assumption is the primacy of democracy in political matters. It may therefore come as a shock to learn that almost no one in 18th century Britain would have considered such an idea sensible—and that includes just about all the ‘radicals’ of the time.

Why is this? How did it come about that demands for reform of the franchise and representation in parliament automatically excluded large numbers of adults from any direct representation at all? Even the Levellers of the 17th century, often wrongly seen as the equivalent of today’s extreme Left, never went beyond demanding the franchise should include all ratepayers: males who earned or owned enough to be subject to payment of the Poor Rate in their parish. If we want to understand our forebears’ outlook on their society, we need to get a few things straight.

Everyone would know how you cast your vote. You could not promise one thing and vote differently.

In the 18th century, there was no secret ballot. Votes were cast openly and personally, and duly recorded and published afterwards. How you voted would be public knowledge. If you hadn’t voted as you were expected—or had pledged—to do, you couldn’t hide it. That’s why there was such an emphasis on being a “free agent”—at least in theory. If you depended on someone else for your livelihood, it was believed you could never vote freely, for fear of loss as a result.

What was Your Stake in the Country and Society?

People with no “skin in the game”—nothing to lose either way—did not deserve the franchise.

Did you have anything at stake when you voted? By this, people meant property or some other source of wealth or livelihood that might be at risk if things went the wrong way. Not only was it believed that those with nothing to lose would vote heedlessly or frivolously, it was seen as fundamentally unfair for anyone with no stake in society to be able to vote on the same basis as others who had much to lose.

The implication of both these assumptions was clear, as stated by ‘Regulus’, writing in a radical journal, the Political Register, in 1768. He explained that the following should be excluded from “the People” who should determine the country’s rulers.

… The illiterate rabble, who have neither capacity for judging of matters of government, nor property to be concerned for.

Sir William Blackstone, the pre-eminent constitutional authority of the time, wrote thus in his Commentaries, defending the need for a property qualification on the grounds that it would exclude:

Employment of any form precluded you from being a “free agent” in political terms.

That would include nearly all those employed by another. With no security of employment, legal protections or employment rights, employees were treated legally as ‘servants’ to a ‘master’ (their employer). They would have to vote as he told them, since everyone in that situation would fear for their jobs if they did not. You did not work for an impersonal company either. You worked for a specific individual, even if that individual was the king.

Only those with education sufficient to grasp the issues and implications involved were worthy of having a vote.

Voting was also considered to be a serious matter, to be undertaken thoughtfully, with a proper understanding of the issues at stake. Emotional decisions were seen as unacceptable, since they laid the system open to glib, ambitious demagogues. Ignorance must therefore be a total barrier to inclusion in the political process. The education needed to make sensible political decisions was assumed to be that accorded to the rich and some of the middling sort; not simply literacy, but sufficient education and leisure to be able to grasp the subtleties of political and ethical arguments. Even the 1805 editor of Adam Smith’s The Wealth of Nations, thought literacy unnecessary for the ‘lower orders’.

To follow industry and learn to live on their income and be attentive to their duty, constitute the principal part of education in all the inferior ranks.

Were the poor and others outside the franchise represented at all? If you had no vote, were your interests protected?

The Georgians actually took this matter seriously, at least in theory. They believed it was implicit in every election that elected members should represent the whole, the national interest, not just the interests of the small group who had elected them. To do this they must be free to vote independently, unconfined by party or other interests. The radicals were especially insistent on this point. There should, they proclaimed, be no “placemen” (MPs holding government or royal appointments) or “pensioners” (MPs receiving government salaries) in parliament. The very idea of “three-line whips” or enforceable party discipline would have appalled them. As it was, 18th century parties were more like shifting groups of like-minded friends than political machines.

In Georgian times therefore, British MPs were free to vote any way they wanted and to change party allegiance at any time without implications. The US system retains this idea, since it follows a written constitution produced by 18th-century gentlemen of English extraction. Even today, political parties in the USA cannot enforce party discipline in voting as they can in Britain. Each elected member of both houses of Congress has to be persuaded to support the party line.

William Windham, MP for Norwich, for much of the latter part of the 18th century, started out as an opponent of the government, especially over their response to problems in the American colonies. He was known to be a supported of Charles James Fox, which would make him, in modern terms, a left-winger in the generally more left-wing Whig Party. But when the French Revolution came long, he was convinced by the apocalyptic arguments of Edmund Burke and swapped sides, even going so far as to serve in the cabinet under the arch-Tory, William Pitt the Younger. Yet he still stood in elections as a Whig, albeit a pro-government one, and was re-elected several times on that basis.

Even if you disagree with everything the Georgians believed on the matter of restricting the franchise, you have to accept it was logically derived from the general assumptions of the day. If kings and nobles were to be replaced as sole rulers by a group more representative of the country as it stood at the time, it was unthinkable that this should include people who had never been thought of as capable of anything save manual labour and following orders.

Parliament may have won its supremacy by civil war and a “glorious revolution”, but it ought still to be made up only of those judged fittest to rule by the accepted standards of the time. To that was added the logical conclusion that those who elected the parliament’s members, or took part in local government, ought to be the worthiest to undertake such tasks. That’s why even the radicals shared much the same viewpoint as the conservatives on the franchise, though on precious little else. So long as the fight was to stop monarch and aristocrats from taking back all the power they had lost, there could be no place in politics for the poor, the weak or the politically uninformed.

Independent researcher and author of mystery stories set in Georgian Norfolk.
View all posts by William Savage →
This entry was posted in Politics. Bookmark the permalink.

1 Response to The Georgian View of Democracy