Georgian Deism and Other ‘-isms’

Posted on February 8, 2017 by William Savage 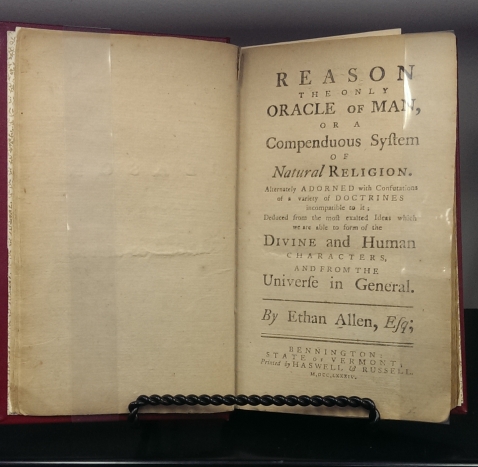 I thought it would be useful to review and explain the basics of the three most common and widespread alternatives to orthodox Christianity in the 18th century—at least amongst the educated classes. All three attempted to find entirely rational explanations for the world as it was seen to be. All denied the need for supernatural explanations or entities. All are still very much with us, though sometimes under other names.

In my previous post on this topic, I set out the background to the Georgian and Regency struggle with the tenets of orthodox Christian teaching, many of which were already being challenged by the discoveries of science. Now we’re down to the details of the solutions various groups of thinkers found.

In the absence of ‘Big Bang’ theory, quantum mechanics and particle physics, 18th-century people struggled with the question of how the universe came into existence. The Bible provided one answer, albeit both a supernatural and an irrational one. It claimed a personal God had created everything and continued to use his supernatural powers to intervene in minute ways to regulate his creation.

To many, this picture was unbelievable and even blasphemous. How could you make sense of an omnipotent, perfect god who created a universe he needed to tinker with constantly? Wouldn’t a human clockmaker whose clocks needed constant regulation and repair be accused of producing shoddy goods? In the orthodox view of things, wasn’t God marked out in the same way as a poor workman?

Even setting aside such thorny matters as the reason for evil in the world, the orthodox, biblical picture did not fit with the newly discovered laws of nature. If a personal God laid down these laws, why would he act supernaturally, which must overturn them? Why didn’t they automatically produce what the scriptures claim God wants? How could a perfect Creator produce such an obviously imperfect universe? To be told “God moves in a mysterious way” seemed to be no more than avoiding the question.

Once created and supplied with a suitable source of energy, each part of the universe ran itself.

The deists squared this circle by assuming a universe needed a Creator, whether a personal or an impersonal one, but rejecting the rest. The nature of this creator was unknown, and probably could never be known. Once He, She, or It had created the universe and established its laws, the Creator withdrew, leaving the mechanism to run by itself. Since many of the Founding Fathers of United States were deists, this is the viewpoint enshrined, by implication, in the Declaration of Independence and the US constitution.

The Creator of the deists required neither worship nor any other contact with human beings. Nor was He, She, or It going to intervene on anyone’s behalf via supernatural means. The laws of nature were just that: unalterable, unchangeable laws by which everything worked, laid down since creation itself.

Pantheism took the supremacy of the laws of nature one step further. It argued that if the Laws of Nature govern everything, there is no need to assume any kind of Creator. Nature is its own creator and has set its own laws. What Nature does is what there is—and nothing else. To explore Nature and its ‘laws’ is to ‘know’ God.

A good many people today are pantheists without knowing it.

If the laws of physics, chemistry and quantum mechanics govern all, and the Big Bang happened because it must under those laws, that is pantheism, pure and simple. In fact, experimental and theoretical science is almost inevitably pantheistic, since it assumes an ordered universe which can—in time—be understood via the unalterable mechanisms built into it.

Pantheism in the 18th century revered Nature and all its works. Unlike deism, it wasn’t a cold, detached view of a fixed and totally materialistic world. No one knew whether all the ‘laws’ of Nature had been discovered. Some might even concern emotions and thoughts, as well as material things. By assuming and seeking out elements to existence beyond the world of the senses, you could find space for an outlook close to the spirituality of orthodox religions. What such elements cannot be is supernatural: i.e. outside of Nature itself and its laws.

In the 18th century atheism—as in parts of the US today—was a term of abuse, centred on the hoary—and demonstrably false—claim that belief in God is essential to prevent moral anarchy. Given the vast range of evils committed by believers in every religion, it would be hard to find anything extra which unbelief might cause someone to do!

Atheism saw no need for gods of any kind. Religion was a human invention, designed to control other people’s behaviour at nil cost to the controller.

However, setting this aside there is a better way to understand what genuine atheism represented to the Georgians. Atheism is, at root, less a denial of the existence of God than a denial of any need or place for gods, goddesses or the supernatural within the universe. In that sense, it was rather rare until Darwin, in the mid–19th century, revealed a mechanism whereby random mutations, subjected to selection by means of adaptation to the environment, could account for both a multiplicity of living and extinct species and an exquisitely ordered relationship between each organism and its place in the natural world. This destroyed the old argument that the obvious design neatness of living creatures demanded creation by an intellect. The inanimate world had never needed an explanation for its structures, so now there was a complete method of describing the universe and its origins without the need for any divine being.

Many 18th century intellectuals thought religious faith was only for the poor and uneducated.

If the question of the existence and relevance of gods remained unresolved, that was more to do with mankind’s need for a comforting belief in a universe allied to human values than anything else. Even in the 18th century, to set aside any ‘personal’ link between an individual and the universe demanded strength of mind. With no god to ask to intervene on your behalf, the world looks to some to be a cold and threatening place.

Faith had another huge advantage: it could be used to bolster and justify the political status-quo. Non-belief was natural for the educated and those interested in the new sciences. However, the rising forces of evangelical Christianity were useful allies for the ruling elite. Evangelicals wanted to renew belief in the orthodoxies of faith. Not entirely co-incidentally, that process would also ratify the claims of the elite to superiority and power as the ‘natural’ rulers decreed by God. The later, Victorian hymn neatly summed up this viewpoint:

“The rich man in his castle,

The poor man at his gate,

God made them high and lowly

And ordered their estate.”

Muscular, evangelical Christianity was the ideal creed for imperialists.

If the heart of much 18th and 19th-century evangelical Christian social and political thinking was empathetic, the head was quickly taken over by the forces of the status quo. “We, the rich elite, are at the top because God says so. To question this is to question the wise decrees of God.”

It was an ideal creed for any burgeoning imperial power. It trumpeted socially conservative values, virtually outlawed any rational argument and reinforced hierarchies as God’s way of arranging society. In doing so, it also stayed implacably opposed to Darwin and all alternative scientific or rational explanations of the way the world works. The answer to everything lay in the Bible—or at least those parts each sect chose to recall. In some parts of the world, religion remains like that to this day.

One reason I find the Georgian period so fascinating is the way it highlights problems we are still facing. Even a most cursory look at the news will reveal that wars of religion are just as prevalent now as they were then. Many of today’s terrorists still claim to be acting in the name of their God, just as Victorian imperialists did. Nor have we resolved the ongoing clash between the discoveries of science and the teachings of religions derived from cultures last flourishing 1500 or more years ago.

Author of mystery stories set in Georgian Norfolk.
View all posts by William Savage →
This entry was posted in Georgian Society, Leisure. Bookmark the permalink.

6 Responses to Georgian Deism and Other ‘-isms’