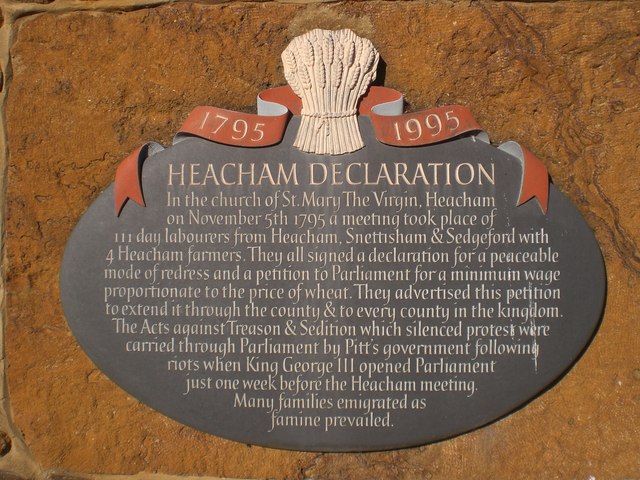 In 1793, the tensions caused by the revolution in france finally exploded into a pan-european conflict. In some ways, it was nothing new. Wars were endemic to most parts of the European continent. Britain and France had been fighting one another sporadically for more than 500 years before. This time, however, war between the two countries was to be on a far greater scale — though no one could have foreseen it would last for 22 years.

The war’s effects most often impacted the ordinary people of England in the workplace and the kitchen.

It’s natural for historians to lay much of the emphasis on the political and military aspects of the fighting. I want to consider another side to the Napoleonic War. The war’s effects most often impacted the ordinary people of England in the workplace and the kitchen. Britain was moving rapidly from being a subsistence to a market economy. More and more people bought the bulk their food instead of growing it. Instead of working on the land, many now gained employment and income in factories, mills and the growing towns of the industrialising North. The effects of the war, exacerbated by a series of poor harvests, were felt in all these areas and caused a good deal of unrest and discontent. It wasn’t until after 1803, when invasion seemed almost certain, that British people succumbed to a wave of patriotism. Not until after the great victory of Trafalgar in October 1805 did they show a real determination to see off ‘Old Boney’ for good.

Local people, surrounded by fields of grain, did not react well to high prices, caused by the insatiable demands of London.

In the counties of East Anglia, with a long history of close trade and family ties with what are now Holland, Belgium and the countries of Scandinavia, the effect of the war on business was felt with particular severity. It was — and still is — one of the primary grain-producing areas of the country, so agricultural reform and improvement arrived there early and in full measure.

Local people, surrounded by fields of grain, did not react well to high prices. The trouble lay partly with the insatiable demands of London, and partly with exports to other European countries suffering grain shortages of their own. Many did not understand the nature of a market economy. Efforts by local magistrates to limit rises in the cost of basic foods like bread did little to help. Few were effective anyway. Instead, local mobs resorted to seizing grain stores and flour mills and selling the produce themselves at what they thought were more appropriate prices. Despite receiving the money afterwards, the merchants and millers were far from amused!

In 1792, there was an especially violent riot in Great Yarmouth because of the price of corn. The local authorities managed to suppress the riot and do so without calling in the army. The Mayor, Edmund Lacon, was knighted as a reward. Yet this was far from the only example of local unrest due to high food prices, particularly for grain — and hence bread. Millers were accused of holding back supplies to increase the price, or depriving local people because the price in London was higher. Many dealers sold grain and flour to the military authorities, especially the navy, instead of sending it the nearest market town.

Food riots were usually short-lived affairs, but the bread riots of 1795 and into 1796 were different. Outbreaks of disorder caused by high bread prices spread throughout Britain.

These food riots were usually short-lived affairs, but the bread riots of 1795 and into 1796 were different. Outbreaks of disorder caused by high bread prices spread throughout Britain. Wheat yields in 1795 were extremely low, due to bad weather as well as the war. There had also been a poor harvest in 1794, followed by an extremely cold winter, which stopped farmers from working on the land. The spring of 1795 again produced bad weather, so that supplies to the markets were reduced. The war against revolutionary France had so disrupted European and Atlantic trade that it prevented the import of sufficient grain to make up the shortfall. What followed was a full-blown crisis, as food prices soared. Some areas seemed on the brink of famine.

Fear of a British Revolution

The riots, combined with unrest over the war, might have offered a fertile ground for the republican and revolutionary movements then active. In fact, most were strong on rhetoric and protest, but weak when it came to action. Still, with recent events in France in mind, and with unrest in Ireland almost a constant, they were enough to provoke Pitt’s government into taking Draconian action. The leaders of such groups were arrested and meetings banned. Virtually any organisation thought to be seditious, or antagonistic to the current form of government, were targeted. The crisis was weathered, but not without resorting to methods of dubious legality in constitutional terms.

There’s little evidence the French were behind any of this, save in the broadest sense of offering moral support. Even the Irish, desperate for French help to stage an armed rebellion, found themselves let down.

There’s little evidence the French were behind any of this, save in the broadest sense of offering moral support. Even the Irish, desperate for French help to stage an armed rebellion, found themselves let down. In England, the Corresponding Societies and other revolutionary groups looked back more often to the English Civil War for their inspiration than to events in France. ‘Conservative’ thinkers argued that Britain had already had its revolution in 1688 and needed no other. Radicals claimed that the spirit of that ‘Glorious Revolution’ had been watered down by the king and his Tory ministers. Just as today, politicians split on party lines: the Tories were for stability and the status quo; the Whigs — especially the faction around Charles James Fox — for significant change.

It’s interesting to reflect how little things have changed over some 250 years. Both sides used ‘scare tactics’ to win over support. The Tories, with Edmund Burke as their champion, decried all that came across the English Channel as likely to ruin Britain’s future prospects in the world. The Foxite Whigs pointed to the need to reform Britain’s constitution and believed continental models could indicate something of how to do it.

In the end, of course, Britain went its own way via the great Reform Act — but not until after more than sixty years of acrimonious, and often pointless, argument.

Independent researcher and author of mystery stories set in Georgian Norfolk.
View all posts by William Savage →
This entry was posted in Georgian Society, Keeping the Peace. Bookmark the permalink.
%d bloggers like this: