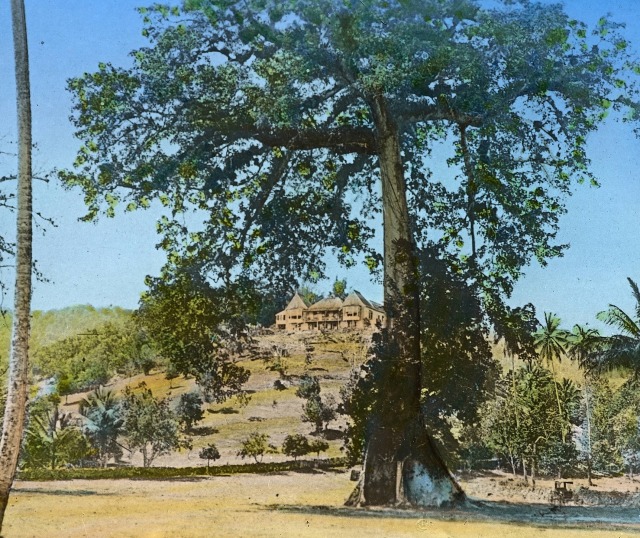 The use of mahogany in domestic furniture became so ubiquitous in the 19th and early 20th centuries that it’s something of a surprise to discover that the wood was virtually unknown in Britain before the start of the eighteenth century. In fact, no furniture using mahogany has been positively identified in Britain before that date. The tree itself was known from the middle of the 17th century, but any earlier usages appear to have been confined to small amounts used in shipbuilding. In fact, surviving Customs returns make no mention of the import mahogany for any reason until 1700, when £5 worth seem to have been imported during that whole year from Jamaica. Some was on sale in London not long after, as this advertisement in the London Gazette of 25th February, 1702 shows. However, the “Mary Man of War” mentioned was a Spanish ship taken as a prize, so this sale may have been more by chance than design.

On Wednesday the 3rd of March next, at 9 in the morning, will be exposed to publick Sale by the Candle, at Salters-Hall in St Swithern’s Lane, London, a Parcel of Damag’d Cocheneal, out of the Mary Man of War; together with the remaining Goods of the Little Galeon, call’d the Mary’s Prize, consisting of 4 bags of Cocheneal, some Calcin’d Earth, Pictures, Lackered Tea Tables, Chocolat-mills, White and Brown Sugar, Molosses, Nicaragua and Mahogany-wood, West Indian Box, etc.

The true mahogany tree is native to the Caribbean, together with Central America and the southernmost parts of Florida. Most of the wood imported into England came from Jamaica, although a significant part of the trade passed through the American colonies before 1776. Some of it must have stayed there, since probate inventories from Philadelphia mentioned mahogany amongst the stock held by cabinetmakers and joiners early in the century, while mahogany furniture was listed for domestic premises at around the same time.

It looks as if the earliest use of mahogany for furniture making in England may even be later than its use in the American colonies. This can’t be proved, since there’s no firm evidence of the first production of mahogany furniture. There is only a series of anecdotes stating that 1724 marked the date when production of furniture using mahogany began. Before that time, fine English furniture was mostly made from local woods, such as oak, walnut and yew-wood.

Another likely explanation for its quick take-up by cabinetmakers and joiners was an Act of Parliament in 1721 (The Naval Stores Act, George I cap.8) that removed all duty from timber imported from the American Colonies. Since much of the mahogany reaching England came via those Colonies, along with a good deal of American walnut, the removal of duties doubtless greatly stimulated the trade. By the 1740s, mahogany furniture was being made throughout the kingdom. It was even being exported back to the West Indies by the middle of the century. It had become the fashionable wood and the cabinetmakers who used it prospered greatly.

The island of Jamaica was of vital importance to British trade in the 18th century. For a start, it was the major source of sugar — ‘White Gold’ — and with it the wealth of a good many English merchants. It was also the focal point for the triangular trade in slaves, many of which worked in the sugar plantations. Ships sailed from Liverpool or Bristol to the West Coast of Africa, picked up a human cargo of slaves, sold them in Jamaica, bought sugar with the proceeds and returned to England, where a good deal of the sugar was sold into continental Europe. Since mahogany trees grew abundantly in Jamaica, it made excellent sense to use this timber as another source of profitable cargoes. Much of the mahogany brought into the country during the 18th century was imported by these routes, then distributed via coastal shipping. We know the wood for Walpole’s Houghton Hall in Norfolk arrived via King’s Lynn, which had no direct trade with Jamaica.

Sir Robert Walpole’s architects used mahogany extensively in building Houghton Hall in the 1730s . The wood was used for doors, door cases, stairs and panelling, suggesting that, while undoubtedly new and highly fashionable, the cost of mahogany was at least comparable to other, alternative woods. Walpole was certainly extravagant in building his mansion, but the widespread use of mahogany throughout the building would probably not have been possible had it commanded a significant premium.

Why did mahogany quickly become so important? While part of this must be down to fashion, there were also severely practical reasons. Compared with the woods available previously, mahogany combined greater ease of working, relative freedom from warping and instability and superior colour, graining and finish. James Macfadyen, writing in 1837, praised ‘Old Jamaican Mahogany’ as superior to that produced by any other country, adding:

The exquisite beauty of the finer kinds of mahogany, the incomparable lustre of which it is susceptible, exempt also from the depredations of worms, hard, durable, warping and shrinking very little, it is pre-eminently calculated to suit the work of the cabinet-maker. Accordingly, these admirable properties, added to its abundance, and the largeness of its dimensions, have occasioned it to be manufactured into every description of furniture.

Sadly, as the largest and most easily accessible trees in Jamaica were harvested, they were not replanted. Supplies had to be taken from higher elevations and drier, rockier ground. The trees that grew there produced much harder, closer grained wood, which was tougher and less easily worked, but allowed for the legs and rails of furniture made after the 1750s to be made more slender. What we now think of as the Chippendale-style of furniture would not have been possible without access to wood of such strength. Over time, demand outstripped supply and other woods of similar strength, colour and grain also came to be known as mahogany, some of these grown elsewhere in Central and South America, some as far away as southeast Asia.

The next time you are visiting some English stately home, take a careful look at the furniture. You will almost certainly see that furniture from the first half of the 18th century and earlier appears markedly sturdy in design. In contrast, late Georgian and Regency furniture, nearly all of it in mahogany, displays a slender elegance that was subsequently lost in the Victorian taste for excessive elaboration.

Independent researcher and author of mystery stories set in Georgian Norfolk.
View all posts by William Savage →
This entry was posted in Commerce, Georgian Society. Bookmark the permalink.

6 Responses to Mahogany: An Eighteenth-century Wood