The Murderous Georgian Rector of Wiveton 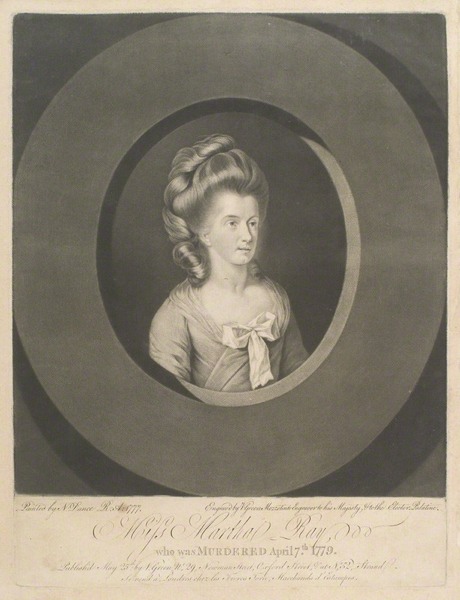 At around 11:15 pm on April 7, 1779, the audience began to leave the Covent Garden Theatre after a performance of a popular comic opera called “Love in a Village”. It was a warm night for early spring, and the crowds outside made it hard for the theatre-goers to reach their waiting carriages. A Mr. John McNamara, walking nearby, saw two ladies struggling to get through the throng of people and went to help them, becoming the closest witness to the sensational murder.

The two women were Martha Ray (or Reay), long-time mistress of the Earl of Sandwich and mother of five of his surviving children, and her friend, the singer Caterina Galli. Caterina entered the carriage first, while Martha waited to follow her. Just then, a young man, dressed entirely in black, darted forward. What happened next was related at the trial by a nearby fruit seller, Mary Anderson:

“Just as the play broke up I saw two ladies and a gentleman coming out of the playhouse; a gentleman in black followed them … When the carriage came up, the gentleman handed the other lady into the carriage; the lady that was shot stood behind. Before the gentleman could come back to hand her into the carriage the gentleman in black came up, laid hold of her by the gown, and pulled out of his pocket two pistols; he shot the right hand pistol at her, and the other at himself. She fell with her hand so (describing it as being on her forehead) and died before she could be got to the first lamp; I believe she died immediately, for her head hung directly. At first I was frightened at the report of the pistol, and ran away. He fired another pistol, and dropped immediately. They fell feet to feet. He beat himself violently over the head with his pistols, and desired somebody would kill him.”

Martha Ray was dead, aged just 35. Her murderer, Rev. James Hackman, was nine years her junior and the newly-appointed rector of Wiveton, near Blakeney in North Norfolk. Not surprisingly, the event caused a public sensation.

Hackman was arrested by a constable, alerted by the sound of shots, and put in prison to be sent to trial at the Old Bailey on April 16. In his defence, he claimed his intention had been to kill himself in front of Martha Ray, but when he arrived, he had suffered temporary insanity and had acted “in a momentary phrensy [sic]”. The judge clearly did not believe him, drawing attention to a letter found in Hackman’s pocket, addressed to his brother-in-law Frederick, which, he said, showed “a coolness and deliberation which no ways accorded with the ideas of insanity”. The jury did not believe Hackman either, perhaps because the prosecution had made much of the fact that he had taken two pistols to the scene, one to kill Martha and one for himself. The Reverend James Hackman was therefore convicted and duly hanged at Tyburn on April 19.

Why was Martha Killed?

The brief trial report leaves more questions open than answered. All the public interest also led to confusion, as various writers published their own versions of the events, notably Sir Herbert Croft, who, in 1780, wrote a heavily romanticised and fictionalised account of the supposed relationship between James Hackman and Martha Ray. The book, called Love and Madness, a Story too true, in a series of letters between Parties whose names could perhaps be mentioned were they less known or less lamented, was a huge success and passed through seven editions. In fact, these letters between Hackman and Ray were all invented to support Croft’s view that it was a love affair gone wrong and Martha Ray bore some of the blame for her death.

The reality was likely more prosaic. We know now what can happen when an obsessive stalker, in this case Hackman, fixates on a victim. It is far from unusual for a torrent of unwanted messages and attentions to turn to violence in the end. The most likely explanation comes from Hackman’s actions. He had tried to form a relationship with Martha, who rejected him. He had proposed marriage and been turned down. He had followed her around London and had been seen watching her during the performance that evening. All are known today to be characteristic actions of an infatuated stalker.

James Hackman and his Victim

James Hackman was born in 1752. He started out as an apprentice mercer, then joined the army, taking up an ensign’s commission in the 68th Regiment of Foot, which his parents bought him in 1772. In 1776 he was promoted to lieutenant, but soon resigned his commission to seek ordination in the Church of England. In April 1779, he was a newly minted cleric, having been ordained deacon on February 24, 1779, priest four days later, and appointed to the living of Wiveton in Norfolk on March 1.

Martha Ray seems to have been an unlikely “femme fatale.” The daughter of a London corset maker, she caught the Earl’s eye when she was about 17, becoming his openly acknowledged mistress and bearing him nine children, of whom five survived. A contemporary description of her goes:

“… not what we would call elegant, but which would pass under the denomination of pretty; her height was about five feet five inches; she was fresh-coloured, and had a perpetual smile on her countenance, which rendered her agreeable to every beholder.”

It is not certain exactly how and where the two of them met, but it was probably in or about 1772, while Hackman was still in the army and running a recruiting party in the neighbourhood of the Earl of Sandwich’s house at Hinchingbrooke in Huntingdon.

Whenever and wherever Hackman encountered Martha, he fell madly in love. He constantly tried to persuade her to return his ardour, eventually proposing marriage. We cannot know if she encouraged him at first, nor whether her rejection of him was based on love for the Earl or a more material choice between being the mistress of a rich man and the wife of a clergyman. What is certain is that he had her most recent letter rejecting his marriage proposals in his pocket the night he shot her dead.

Did The Reverend James Hackman really set out that day in 1779 to kill Martha Ray? Was his claim that he only wanted to kill himself in front of her anything more than an attempt to clear himself? Did she encourage him in any way? We will never know. The appetite of the press for scandal, then as now, and the unscrupulous actions of authors seeking to cash in on public curiosity, mudded the water enough to make any final conclusion impossible.

What remains is a remarkably modern story of obsession, despair and a young man tormented by feelings he was finally unable to contain; and clear evidence that the media were no different in the eighteenth century than they are today. The lure of a good story, however untrue in its details, will always trump the facts in the public’s memory. The protagonists have, over time, been presented as victims of love, practitioners of debauchery and callous attention-seekers. Each age reinterprets their lives to suit its own preconceptions. Ours is no different.

2 Responses to The Murderous Georgian Rector of Wiveton