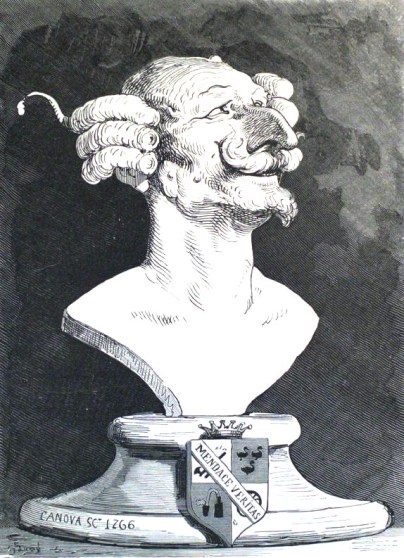 It’s long been noted that groups of men tend to indulge in boastful talk amongst themselves, each person trying to outdo the others or cap their stories. Maybe this is simply natural competitiveness amongst males, maybe it is more, but the tendency is common. That’s what a ‘tall story’ was in the eighteenth century: using an alternative meaning of the word ’tall’, now rather forgotten, which mean ‘grand’ or ‘lofty’ — a story told perhaps in ‘high-flown’ language and meant to impress.

Others there be, whose parts stand not so much towards tall words and lofty notions, but consist of scattering up and down, and besprinkling all their sermons with plenty of Greek and Latin. (John Eachard, The Grounds & Occasions of the Contempt of the Clergy, 1670)

In contrast, talk in mixed company was not so boastful or grand. Women were not so likely to be impressed by boastfulness, perhaps, and many would lack the education to join in ‘competitions’ based on capping one another’s Latin or Greek quotations. Here, ‘small talk’ was preferable.

A sort of chit-chat, or small-talk, which is the general run of conversation in most mixed companies. (Earl of Chesterfield, Letters, 1761)

In many ways, the essence of a tall story is that it should contain exaggeration, not downright lies. Indeed, it ought to be impossible to tell where plain truth ends and exaggeration and elaboration takes over. As a result, eighteenth century accounts of many activities contain statements that would make almost any modern reader raise his or her eyebrows in disbelief.

Was it so at the time? Perhaps not. Some very serious scholars, such as Jeremy Bentham (1748 – 1832), recorded stories which must verge on meeting the criteria for a ‘tall tale’. Take his handwritten record of this tale of an escape by prisoners from Botany Bay in Australia. He records that, on the night of March 28th, 1791, James Martin and eight other prisoners, after being transported from England, escaped from Botany Bay in the governor’s six-oared boat, subsequently travelling along the east and north coasts of Australia, arriving after a journey of 3000 miles in the Dutch colony of Kupang, in West Timor. Eventually being unmasked for what they were, the men were sent back to England to finish their prison sentences, a journey which four of them failed to survive.

Not surprisingly, this famous escape attracted many myths and fictions around the escapees and their feat of survival. Bentham, a noted critic of convict transportation, must have welcomed the contrast between the prisoners’ epic tale of survival and their fate on the return to England.

Of course, the commonest meaning of a ’tall tale’ includes a strong element of humour along with exaggeration and downright creativity. Eighteenth-century newspapers often included such stories, made even funnier by being told, as it were, with a straight face.

An extraordinary instance of sagacity in Rats.

A gentleman in Holland, famous for curious fowls, having observed that a particular hen, which used to produce an egg daily, had omitted for some days, and being desirous of learning the cause, particularly as the hen made the cackling usual after laying, placed himself so that he could plainly observe whatever might pass at the nest, and was greatly surprized [sic] at the appearance of two Rats, immediately after the hen’s quitting it, which conveyed away the egg; this they effected by one of the rats lying on its back, while the other rolled the egg on to its belly, then closing its feet round it, held it securely, while the other dragged it away by the tail, with its mouth. The above is asserted as a truth by person, on whose veracity we can depend. (Norfolk Chronicle, Saturday 9 April 1791)

The most famous purveyor of such tales was undoubtedly a real-life German army captain, Karl Friedrich Hieronymus, Baron von Münchhausen (1720-97). During his retirement, he entertained his friends with preposterous stories about his time in the Russian army fighting the Turks. His most famous tale was of being caught between a crocodile and lion, both intent on devouring him. As the lion sprang, the baron fell down, so that the lion flew over his prone body and straight into the crocodile’s outstretched jaws, choking the crocodile in the process. Thus the baron was rid of both threats at once!

The original book of his adventures, published in the late 18th-century, may even have contained some of von Münchhausen’s own stories. However, over time, newer editions added more adventures, mostly invented or stolen from other literary works.

Finally, how far can we credit tales of stupendous feats by eighteenth-century people — feats which we believe were not achieved until our own times? For example, was Sir Roger Bannister truly the first man to run a mile in less than four minutes, or did several eighteenth-century men achieve this record long before him?

For example, on 9th May, 1770, James Parrott, a London costermonger, took on a wager of fifteen guineas that he could not run a mile in under four and a half minutes. Elaborate preparations were made to ensure accurate timing. Using the ordinary streets from Goswell Street to Old Street in the City of London, he won his wager.

1770 May 9th, James Parrott, a coster-monger, ran the length of Old St, viz. from the Charterhouse- wall in Goswell Street, to Shoreditch Church gates, (which is a measured mile) in four minutes. (The Sporting Magazine, 1794)

He wasn’t the only one. The Oxford Journal of 22nd December 1787, reported that a man named Powell, a plater from Birmingham, was wagered one thousand guineas that he could not run a mile within four minutes. According to the paper, Powell ran a trial in four minutes, three seconds, saying: “He ran entirely naked, and it is universally believed, that he will win the wager.’”

Whether he won his wager or not, we never hear, The Sporting Magazine for 1796 stated that a man called Weller, one of three brothers, “undertook for a wager of three guineas to run one mile on the Banbury road, in four minutes, which he performed two seconds within the time.” That is, Weller ran a mile in three minutes, fifty eight seconds.

There you have it. If today’s tabloids survive on amazing — and often unbelievable — reports and ‘fake news’ it was much the same 250 years ago. “Believe it or not” was as common a start to a report then as it is today.

Independent researcher and author of mystery stories set in Georgian Norfolk.
View all posts by William Savage →
This entry was posted in Uncategorized. Bookmark the permalink.
%d bloggers like this: