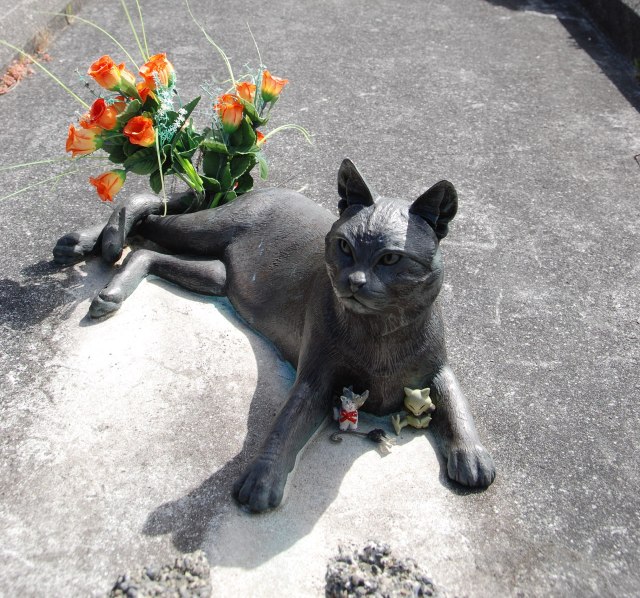 From the middle of the century, epitaphs for pet cats, usually in the form of poems, begin to appear in various newspapers and magazines. Here are some lines from one published anonymously in the London Magazine of 1733, obviously by a poet:

Oppressed with grief, in heavy strains I mourn
The partner of my studies from me torn.
How shall I sing? What numbers shall I choose?
For in my favourite cat I’ve lost my muse . . .
. . . She in the study was my constinate;
There we together many evenings sate.
Whene’er I felt my towering fancy fail,
I stroked her head, her ears, her back and tail;
And, as I stroked, improved my dying song
From the sweet notes of her melodious tongue.
Her purrs and mews so evenly kept time,
She purred in metre and she mewed in rhyme . . .

Another epitaph, published in the Gentleman’s Magazine in 1769, opens like this:

Here lies beneath this verdant hill
Tom, a favourite cat,
Who when alive, did never spill
The blood of mouse or rat.

William Stukeley, antiquarian, wrote this of the death of his cat, Tit:

The creature had a sense far superior to her kind; had such inimitable ways of testifying her love to her master and mistress, that she was as a companion, especially so to me . . . From the admirable endowments of the cat I took a great liking to her, which gave me so much pleasure, without trouble. Her death I grieved for exceedingly .

She was buried in his garden under a mulberry tree, but poor Stukeley could never bring himself to go near it afterwards, or even look at her grave.

This comes from a tombstone at Meaford Hall, Stone, in Staffordshire.

’Tis false that all of pussy’s race
Regard not person but the place,
For here lies one who, could she tell
Her stories by some magic spell,
Would, from the quitted barn and grove,
Her sporting haunts, to show her love,
At sound of footsteps, absent long,
Of those she soothed with purring song,
Leap to their arms in fond embrace,
For love of them, and not for place.

As a final example, here’s the opening of an epitaph from 1775, published in the London Magazine:

Here lies entombed poor honest Blewet.
Poor honest Blewet, pray who’s that?
Some tippling Poet? No, a Cat . . .
It was a loving, lovely creature
Compleat in every grace and feature.

There’s more, but that gives a flavour of the whole.

Why does it seem that literary folk and cats are natural companions? I don’t know, but some of you may have ideas on the topic. If so, please add them via the comments.

Independent researcher and author of mystery stories set in Georgian Norfolk.
View all posts by William Savage →
This entry was posted in Textiles, Tid-bits. Bookmark the permalink.