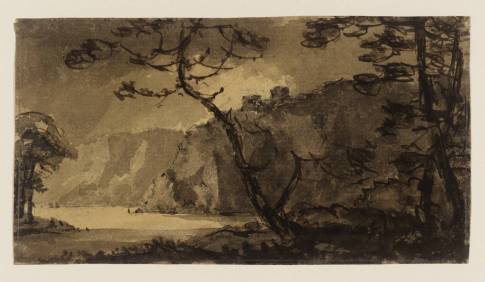 For many decades during the 17th and 18th centuries, young upper-class men (and some women) had undertaken a “Grand Tour” of Europe (principally Italy) to acquire ‘polish’ and gain first-hand experience of the glories of Rome as revealed in its art and architecture. At a time when education in the Greek and Latin Classics was seen as complete in itself, the Grand Tour provided the final ingredient required to produce “politeness”: the capacity to function properly within an upper-class and civilised social environment. To lack this would mean social ostracism and the destruction of future marriage and dynastic prospects.

So far, so good. The road to Rome was filled with young English ‘milords’, eager to have a good time and bring back suitable art to grace their country mansions — and convince their families that they had not spent all their time with Italian courtesans. Unfortunately, as the 18th century progressed, tensions and wars with France, culminating in the Revolution and pan-European conflict, made lengthy visits to Italy too hazardous — and too potentially unpatriotic — to continue as before. Instead, people turned their attention to the remoter parts of England. The burgeoning Romantic Movement endowed places like the Lake District and the Wye Valley with the potential to induce the same awe as the Alps. England’s own ruins — the abandoned monasteries and castles — served as substitutes for Roman aqueducts and temples.

What was lacking was an explicit link between such locations and high art. All the revered masters of landscape painting of the period had chosen continental subjects, many redolent of the influence of the Classical World. How could the ‘correct’ artistic sensibility and taste be nurtured in a countryside as different as England’s? Especially in a place notably lacking in classical ruins, scantily clad nymphs and elegant young Grecian shepherds?

The landscapes and vistas admired on the Grand Tour were themselves a series of artistic constructs far removed from dull reality. The much-admired landscapes of artists like Claude Lorrain and Nicholas Poussin were fantasies, not realistic representations. Why should the same process not be applied to English landscapes? Why should continental Europe have a monopoly on the subject matter of the newly created study of aesthetics: the definition of what makes a beautiful thing truly beautiful?

Throughout the century, the wealthiest landowners graced their parks with mock classical temples at suitable viewpoints; or added romantic, ivy-clad ruins as and where needed to produce artistic vistas. Under the influence of men like ‘Capability’ Brown, landscape gardening was transformed into a new and very English art form. The Landscape Style in garden design was England’s greatest contribution to European art in that century, and the one which owed least to continental models. Even the French, who imitated it, called it le jardin Anglais and the style was taken up eagerly throughout all of continental Europe.

The essence of landscape design of the time can be expressed thus: if nature has not produced a landscape conforming to the required aesthetic standards, it should be altered and adapted until it did. In the same way that paintings and sculptures acquired during the Grand Tour could be used to make ‘beautiful’ interiors, your park and garden could be landscaped to offer an equally pleasing aesthetic outside. Beginning with William Kent and “Capability” Brown, the boundary between art and landscape was blurred, until each became an idealised version of the other. Just as an artist could use his imagination to make a view more picturesque on the canvas than in real life, so landscape architects should improve on nature’s raw material to evoke the image required.

We owe much of the definition of the aesthetic of ‘The Picturesque’ to Rev. William Gilpin, Anglican clergyman, artist and author, Uvedale Price and Richard Payne Knight, who established themselves as arbiters of taste in this respect. “Capability” Brown had seen the ideal landscape as made up of curved and undulating lines, formed by wide grassy areas, irregular lakes and trees, alone or in clumps. Gilpin, Price and Payne Knight rejected this as tame and unnatural, just as the geometric regularity French gardens like Versailles were unnatural. ‘Natural’ landscapes should be more savage and less domesticated. It was not just a matter of seeking out places calculated to evoke strong emotions in the viewer (awe, fear, wonder, pleasure). In creating art, whether on canvas or in the landscape itself, those emotions should be heightened into expressions of sublime beauty or jaw-dropping terror. Perhaps the ultimate expression on canvas of art as the expression of latent emotion in a scene surfaced in the wild, impressionistic and often violent visions of JMW Turner. The Fighting Temeraire * isn’t simply being towed to the breaker’s yard; she is heading to an awesome, ghostly Götterdämmerung of her own. 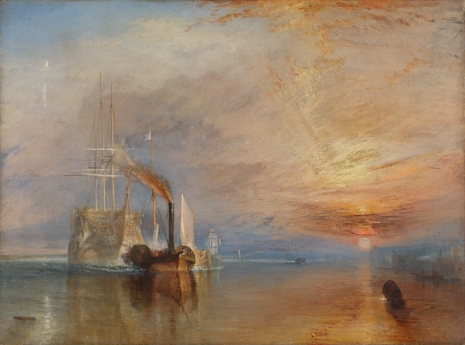 Gilpin’s ideas were then taken up and extended by two squires from the counties bordering on Wales, Uvedale Price and Richard Payne Knight. They knew each other and admired one another’s books. In 1794, Uvedale Price published his “Essay on the Picturesque”, a work he revised over and over until it reached its final form in 1810. In the same year, Payne Knight published a long poem called “The Landscape” and dedicated it to Price.

What both contended, as did Humphrey Repton, was that a truly aesthetic appreciation of nature involved looking at landscape with “a painter’s eye”. The picturesque was, literally, that which was worthy to be the subject of a painting in the fashionable style of the day. Like the paintings of Claude and Poussin, they should confront the viewer with scenes of Classical grandeur, calculated to command rapt attention.

To help you see with this “painter’s eye”, you should turn your back on the scene and view its distorted and recoloured reflection in what was termed a ‘Claude Glass’ or ‘black mirror’: a somewhat concave piece of polished metal with a dark grey surface, which would compress an image of the scene and render it in the brownish, limited palate of colours so familiar from the Old Masters.

The Grand Tour had been an experience for the elite in society, if only from the cost involved and the time it took. Those young men would often be away for several years. Bringing home the expected bounty of acquired art also demanded deep pockets. Completing the tour itself conferred elite status — and significant boasting rights! Entire mansions were constructed to house the booty brought home and display it to awe-struck visitors. The seriously wealthy Coke family at Holkham Hall in north Norfolk filled their newly (and specially) built near-palace with Grand Tour artefacts. The much less wealthy Windhams at Felbrigg Hall a few miles away had to be content with setting aside a single room for the bulk of the art, and allowing some larger paintings to spill over into the remodelled drawing room next door.

How were these socially desirable benefits to be gained while remaining in England?

The new aesthetic of “The Picturesque” offered one answer. To appreciate nature with “a painter’s eye” required time, considerable learning, and the type of connoisseurship only acquired by those with access to private collections of the best landscape art. It was an attribute limited to a wealthy elite; a type of sensibility whose display provided ‘proof’ of elite status and cultural refinement. As with so much in Georgian and Regency times, it was an attribute and an expression of social class. No one who had to earn their livelihood, whether in trade, commerce or industry, would have the free time available to cultivate such a refined aesthetic sense. It marked you out in ways impossible to emulate through mere cash expenditure.

At a time when the landed gentry were under threat from growing middle-class wealth and declining agricultural prices, how comforting it must have been to be able to reassert your superiority via fashionable aesthetic pursuits. After all, such behaviour is still to be found amongst the upper-class cultural pundits of today — and often for similar reasons.

Independent researcher and author of mystery stories set in Georgian Norfolk.
View all posts by William Savage →
This entry was posted in Fashion, Leisure. Bookmark the permalink.

1 Response to Discovering “The Picturesque”