The Georgians and Whist 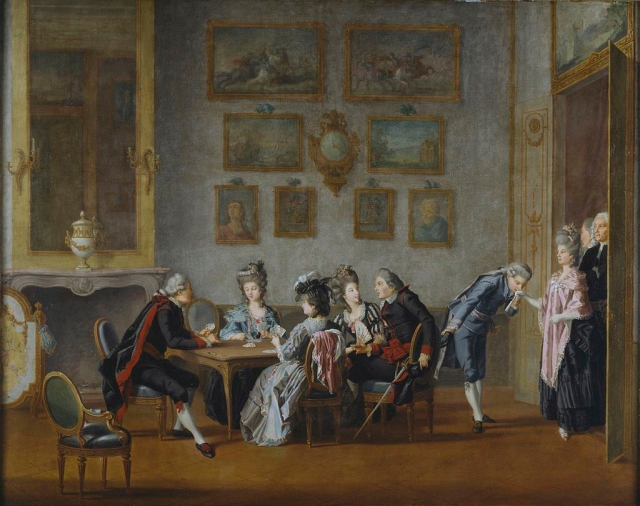 The Polite Gamester; or, The Humours of Whist, 1753

A social revolution swept through Britain in the early-modern period. Its first signs could be seen under Elizabeth I, then its progress during the following century was slow, interrupted by civil war and religious strife. Not until the protestant succession was established by the defeat of James II was rapid progress resumed. During the Georgian and Regency periods, this revolution accelerated to its peak and became the accepted pattern of life in Britain. I am, of course, referring to the rise of the middle class, the ‘middling sort’.

The rapid growth of Britain’s trade and manufacturing in the 18th century brought those whose fortunes depended on them into prominence. No longer was all wealth based on the inherited ownership of land. Merchants and professional men could, through hard work, diligence and personal endeavour, amass fortunes that in many cases exceeded those of the lesser landed gentry. And with wealth came the ability to live in style and indulge in suitable leisure activities. In choosing such activities, they looked to what was most popular amongst the fashionable elite. Gambling came high on the list, especially activities like playing cards, which did not require elaborate training or expensive equipment.

Members of the landed elite were notorious for their addiction to gambling. Some played for the highest stakes, winning or losing fortunes in the course of a single evening. What allowed for this behaviour was family land ownership. Profligate sons could apply to their elders to bail them out of trouble. When those same elders got into debt, they could nearly always raise another mortgage on their estates. Since many of these estates were left to the next generation in entail — a legal device allowing use of the income without personal ownership of the property — risks were limited to bequeathing an estate encumbered with large mortgages.

The middling sort also liked to gamble, if only to emulate the gentry. However, the risks to them were different. Most had no great assets to fall back on to support loans, while their standing in the market was heavily dependent on maintaining a reputation for sobriety, prudence and stability — especially financial stability. Trading or making a living as a professional are themselves risky endeavours. A physician with a reputation for hard living and reckless gambling would soon have no patients. A merchant who gambled his profits away could expect to end in the debtor’s prison.

What was needed was an acceptable, sensible form of gambling, in which stakes were modest and an enjoyable evening would end without anyone facing ruin. Playing cards was ideal and Whist the ideal game.

The Attractions of Whist

As a game, Whist is easy to learn, yet offers the chance to exercise skill in making best use of the cards in your hand. Stakes were generally modest. Winning or losing was cumulative, not based on a single turn of a card or throw of a dice. Above all, Whist is a sociable game, played by pairs of players pitted against each other, with abundant opportunity for conversation and mutual support.

Merchants and professionals, then as now, relied on building up a wide network of friends and acquaintances. Such networks were essential to support trade, attract new business and discover in advance what opportunities or threats lay ahead. What the golf course once was fifty years ago as a place for doing business, the Whist table was two hundred years earlier.

Add to this the Georgian preoccupation with displaying ‘politeness’ — a mix of clubbability, good manners and conversational skill — and you have the perfect environment for evenings combining the modest excitement of ‘sensible’ gambling with abundant opportunities for polishing friendships, cultivating contacts and displaying the virtues of a ‘good partner’ at the Whist table. Whist could also be played in mixed groups, making it an excellent activity to indulge in after dinner at one of the many private parties or public assemblies.

Don’t overlook Whist or dismiss it as a simple card game for long evenings. In Georgian times, skill at the card table was as much valued amongst the middling sort as skill on the dance-floor and the ability to shine in conversation. Even many of the lesser gentry enjoyed a game of Whist and valued the opportunities it might provide. Making contacts to negotiate a marriage to revitalise the family’s finances via the dowry given to a wealthy merchant’s daughter. Finding a suitable patron for a younger son forced to make his own way in the world via trade or the professions. An evening of Whist was a microcosm of Georgian life: decorous, good natured, sociable, competitive and respectable.

Note: I am greatly indebted to the following book for much of my background reading for this article.

Author of mystery stories set in Georgian Norfolk.
View all posts by William Savage →
This entry was posted in Georgian Society, Leisure. Bookmark the permalink.

2 Responses to The Georgians and Whist