“Naming and Shaming” in Georgian Newspapers 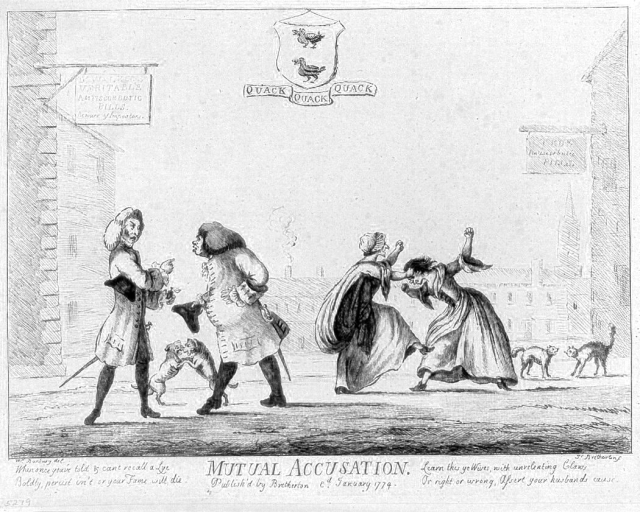 In Georgian times, as today, not all marriages were happy — or even tolerable. Wives ran away. Husbands absconded and deserted their families. Injured parties craved revenge. The discovery that advertisements could be used to publicly “name and shame” the guilty party, as well as seek protection from their future actions, spawned a whole new category of media content.

This melée of marital mischief may be found in many of the advertisements in various local newspapers of the time. Declarations of refusal to honour debts, claims of abandonment, accusations of infidelity and many other bad behaviours were aired openly. The fundamental motivation for doing this, of course, was as much legal and monetary as emotional: the injured partner didn’t want to bear responsibility for the actions of another, or have to cope with the mess they had left behind.

Chelmsford Chronicle, Friday, 11 April 1783: WHEREAS ANN REED, Wife of GEORGE REED, of Burnham, Essex, has eloped from her said husband; therefore notice is hereby given, that the said George Reed, will not pay any debts contracted by his said wife, from and after the the day of the date hereof. The Mark of GEORGE REED.

The Ipswich Journal, Saturday, 1 April 1758: Whereas ANN, the Wife of Robert Baker, of Store by NAYLAND, has eloped from her said Husband without any Provocation, this is to forewarn all Persons not to trust the said Ann Baker, for he will not pay any Debts which she shall contract for; and also to forewarn all Persons not to harbour the said Ann Baker, otherwise they will be prosecuted as the Law directs. Witness, ROBERT BAKER.

Men ran away as well, leaving their responsibilities behind them. This one ran twice, committing bigamy in between!

Chelmsford Chronicle, Friday, 8 September 1786: A CAUTION to the PUBLlC. This is to Give NOTICE, That one JOSEPH WRIGHT, who sometimes goes by the name of KNIGHT, a baker, formerly Leicester, where he has left four children chargeable to the parish, and late of Ingatestone, in the county of Essex, from whence has eloped, and where he married time, though his first wife still living; he is about 5 feet 3, stout made, full-faced, and much pitted with the small-pox; has a sear from the kick of a horse in his right cheek; — the public are desired to guard against the specious pretences of the said WRIGHT, as he has been the ruin of at least one family in lngatestone.

Certain phrases recur often in advertisements like these, perhaps in the belief that they carried some legal weight; making the overall statement official in some way and binding on others. Often the remaining spouse refuses to “pay any debts which she/he shall contract for”, thereby trying to insulate themselves from demands for money supplied to their straying marital partner. Another phrase used is “absented herself from bed and board” meaning something like refusing to supply what a wife was required to do.

Sherborne Mercury, Monday, 29 September 1800: WHEREAS JANE HENRY, Wife, having absented herself from my bed and board, without my consent, and otherwise offended by public prostitution of her person, hereby give Notice, That no person may trust her on my account, as I will pay no debts of her contracting from and after this date. — Witness my hand, this 10th day September, 1800, JOHN HENRY, Boatswain his Majesty’s Ship Culloden.

It was not unknown, of course, for a wife who ran away to make sure of her finances before leaving. £160 would last her several years at least, so his ban on paying her debts was not going to have much effect.:

Hereford Journal, Thursday, 5 May 1785: ELOPEMENT. WHEREAS ELIZABETH, the wife of VAUGHAN WILLIAMS, late of Portsmouth, and now of Brecknock, has lately eloped from her husband, and taken with her Bank Bills value £160. Notice is therefore given to the Public in general, that the said Vaughan Williams will not be answerable for, or pay, any debts which his said wife may hereafter contract. As witness his hand the 19th of April, 1785. The mark X of VAUGHAN WILLIAMS. Witness, JOHN LILWALL. HEREFORDSHIRE. March 19, 1785.

Sometimes “carrot and stick” was used to persuade the fugitive to return, with how much success it is impossible to say. Nor was the pursuer always an abandoned wife or husband. If a family was left without a breadwinner, the cost fell on the parish, under the terms of the Poor Law. It was in the interests of the overseers to get the person back and paying again.

Hereford Journal, Wednesday, 28 February 1798: ELOPEMENT. Whereas JAMES LINK, Wheelwright, has eloped, and left his Wife and Family, chargeable to the parish of Fownhope, in the county of Hereford. He is about 27 years of age, 5 feet 10 inches high, grey eyes, and light hair.— Whoever will apprehend the said James Link, and lodge him in any of his Majesty’s Gaols, and give notice thereof to the Overseers of the Poor of Fownhope aforesaid, will be rewarded and paid all expenses for apprehending him. N. B. If the said James Link will voluntarily return to his family he will be forgiven. JOHN SLADE, Overseer. Feb. 27, 1798.

Of course, what was said in one advertisement might be swiftly rejected in another, as in this case from America, just after the War of Independence was underway.

Connecticut Courant, March 24, 1777: Whereas Deborah Taylor, of East Windsor, wife of the subscriber, has deserted my bed and board, and refuses to live and cohabit with me, these are therefore to warn all persons not to trust her on my account, for I will not pay any debt of her contracting from the date hereof. James Taylor. East Windsor, Feb. 24 1777.

Connecticut Courant, May 12, 1777: In the Connecticut Courant, March 17, 1777, James Taylor was so ungenerous, unhumane [sic] and abusive as to advertise Deborah his wife as a deserter from his bed and board, which is so to abuse the unfortunate Deborah as to oblige her to declare to the public, that James Taylor never did provide neither bed or board for his wife or family, but was for most part of his time absent, but for what purpose I cannot say; he brought nothing home but abusive language for my comfort and the support of his children; and since this unhappy war, he has been inlisted [sic] as a soldier, and went to Canada, from whence he deserted, and his unusual return, on the account of the season of the year, he was suspected for a deserter, was the reason I would not find him any longer bed or board, and not now under the necessity of applying to my friends for necessary subsistence for myself and children. Deborah Taylor. East Windsor, April 16, 1777.

Now that really is naming and shaming!

2 Responses to “Naming and Shaming” in Georgian Newspapers