The Path to Landed Gentry Status 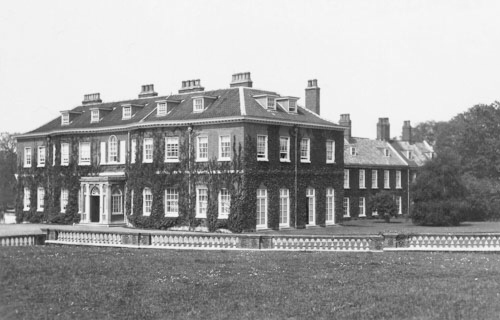 The Rolfe family home, Heacham Hall, burned down in 1941.

Until recent years, the British upper classes, including the aristocracy, were defined by the ownership of land. Why should land ownership matter so much? After all, from the 17th century onwards, there were many merchant and professional households with incomes well in excess of those enjoyed by most landed gentlemen. What magic lay in owning acres of British countryside?

Like so many British attitudes, the answer comes from the past. For centuries, you either owned the land or you worked it. Even craftsmen might need some land to farm. In a largely subsistence economy, what reaches the market is only the produce surplus to personal and family needs. No one grows crops for sale alone. That means it is only those truly at the top of the heap—the gentry and aristocracy—who could own enough land to ensure they could live from the ‘surplus’ produce demanded in rents and feudal fines.

The beginnings of a market economy were upsetting a social structure built on land ownership and inheritance.

By the 18th century, this was changing. A subsistence economy was becoming a market economy. An economy in which those who farmed the land sold their produce at the market instead of consuming most of it themselves. This favoured larger farms, payment of rents in cash, not produce, and a view of land as ‘capital’ and the rents as ‘income’. The landed gentleman still didn’t work his land himself; he owned enough acres to draw a substantial income from his rents on their own. The food he needed, he bought like everyone else.

Along with the move from subsistence to market agriculture, the other change was the rise of the professional, the merchant and the manufacturer. Of course there had been lawyers, doctors, master-craftsmen and merchants long before the 17th and 18th centuries. What had changed was the scale of their work. The professional, paid for his time and expertise, now sought an ongoing practice containing many clients. The merchant bought and sold at the scale of the marketplace, not the village or township. Many sent goods to London, which was by then the largest city in the Western hemisphere by some margin. The manufacturer turned raw materials into finished goods on a national or even international scale.

Power and land ownership were tied together. In an aristocracy like Britain, they could not be disentangled without opening the door to a radical reassignment of power and influence.

The landed gentry needed to compete to retain their hold on power. Their weapon was British conservatism and the lingering mystique of owning land. Land ownership had, in itself, a status denied to mere ‘trade’. Through it, they preserved both their acres and the respect that flowed from them.

That’s why so many wealthy professionals, merchants and manufacturers, having made their fortunes in trade, wanted to convert their wealth into landed properties. By doing so, they could retire to a life of ease and higher status, living off their past profits. Their descendents would inherit this capital, most of it tied up in land, and count as gentry right away.

To see how this process worked, I’m going to use a family from King’s Lynn which rose from ‘trade’ to gentry status in barely fifty years.

The Rolfes of Heacham

The Rolfe family were for many years attorneys and merchants in King’s Lynn in Norfolk. Prosperous, well-regarded men, often holding office within the corporation of what was a wealthy maritime town. The most famous member of the family was John Rolfe, who went to Virginia and married the native American Princess Pocohontas in 1614. For almost 100 years, members of the family retained their status as urban businessmen. Francis Rolfe was town clerk in 1654 and was followed in that office by two further generations of Rolfes. Edmund Rolfe, also town clerk, was described as an upholsterer when he became a freeman in 1674. It was this Edmund who revived the connection with Heacham, a small village along the north Norfolk coast in the direction of Hunstanton.

Generations of Rolfes had lived in King’s Lynn. Now there began to be some sense of attachment to John Rolfe’s birthplace of Heacham.

John Rolfe was said to have been born in Heacham, but subsequent Rolfes were merchants and attorneys and all lived in King’s Lynn. Now Edmund obtained 230 acres of copyhold land in Heacham. What he had in mind is unclear. He had many properties in and around King’s Lynn, so perhaps it was no more than an opportunistic purchase. There may have been some family attachment to the place. Either way, Edmund continued to live in Lynn and rise amongst the elite of the town, marrying the daughter of a former mayor and serving as mayor himself in 1713.

In common parlance, Edmund Rolfe was undoubtedly a ‘gentleman’, but in no way a member of the landed gentry of the county. His little holding in Heacham would not have been enough to ensure entry to the ranks of the landed gentry. After his only son died before he did, probably through ‘dissipation’, his properties passed to his grandson, another Edmund.

Edmund Rolfe II had also been living in King’s Lynn as a freeman and ‘gentleman’, mostly without making much impression. He did obtain the status of freeman in 1720 (when he was listed simply as ‘gentleman’). Like his grandfather and other family members, he too may have been an attorney. He was certainly active in supporting the Walpole family interests locally. He was, therefore, a wealthy professional. Just the kind of person to be produced in a rich sea-port like Lynn, with its important trade in Baltic timber and its position dominating trade along the inland waterways of the fens.

For some reason, went to live at Heacham in 1733, giving up his seat on the town’s corporation as a result. It’s not clear why he did this. His finances were not especially good, so he lived frugally. Perhaps it was simply cheaper to live in the countryside. His first wife also had no links to Lynn, being the daughter of a maltster from Brancaster. After her death in 1739, Edmund married again, this time to the widow of a prominent Lynn brewer. It was a disaster. The two of them quickly fell out and her first husband’s family fought tooth and nail to keep her share of the brewery from falling into her new husband’s hands.

As soon as he acquired real wealth. Edmund Rolfe started on the path towards acceptance amongst the gentry

Edmund’s fortunes finally came good when a second cousin, William Rolfe, died in 1754. He had been an attorney in Norwich, where he had amassed a significant level of wealth, amounting to some £30,000.  He left it all to Edmund.

At once, Edmund and his wife separated formally and he began to build his country estate, based on his inherited lands at Heacham. It was clear he was now determined to take his family into the ranks of the ‘proper’ landed gentry. He sent his only son to Cambridge to study for a year, followed by a period holding a commission in the militia, again under the Walpoles, then a three-year Grand Tour. Finally, in 1764, despite the son having an affair during his time away and an illegitimate son as a result, Edmund II arranged a fine marriage for him. His new wife was Dorothy Folkes of Hillington Hall, an undoubted member of the county’s gentry and a substantial heiress in her own right.

After brief periods living elsewhere, Edmund II kept returning to Heacham. He undoubtedly saw his holdings there as the family’s ‘ancestral lands’, despite having acquired most of them himself. So when he died in 1774, he was buried with considerable grandeur in the proper place, Heacham. He had set his family on the path to becoming gentry, but not completed the journey himself. That was left to his son, Edmund III.

In 1774, Edmund III inherited an estate of around 4,000 acres, but his passage into the ranks of the gentry had begun well before then. For a start, his education was typical of that class and would have fitted him for no other role in life. During his formative years, he had been encouraged to make the ‘right’ friendships and contacts. That is was working was proved in 1769, when he was chosen High Sheriff of Norfolk. He and his father had worked hard to secure this outcome, lavishing money on his education and continually seeking to purchase or lease more land around Heacham.

Like many another newly-arrived member of the gentry, Edmund III marked his changed status by building a house appropriate to what was now his station in life.

When Edmund III inherited, he judged the old house to be unsuitable to his new status. At once he began to lay out the grounds and gardens, followed by planning and executing a considerable upgrading of the house itself. There were to be extensive additions and alterations. The old house was retained, mostly as service areas and servants’ quarters, and a new, brick-built block of nine bays and two-and-a-half storeys was added to it at right-angles to the previous building. This new building cost £4,128 to build and £1,025 to decorate and furnish—say somewhere just over a million pounds in today’s terms.

The Rolfes were far from being the only mercantile or professional family to pull themselves into the ranks of the landed gentry in this way. I have summarised their tale because it was typical of what was happening throughout the country in the 18th and 19th centuries. This continual regeneration and re-supply of the ranks of the country’s elite from below helps explain why it lasted so long and clung so tenaciously to power. Nouveau riche families ‘in trade’ worked to acquire the land-holdings and grand houses necessary to let their humble beginnings be forgotten. Once they joined the gentry, they quickly acquired the attitudes, education and outlook typical of the upper classes.

Edmund Rolfe II worked for his living and perhaps served some kind of apprenticeship as an attorney. His son, Edmund III, went to Cambridge, did The Grand Tour and never needed to do a day’s paid work in his life. In Georgian and Regency Britain of such were The Elite. Maybe it isn’t so different today.

Sources: For much material on the Rolfes of Heacham, I am indebted to the chapter “Founding a landed dynasty, building a country house: the Rolfes of Heacham in the eighteenth century” by Richard Wilson and Alan Mackley, in Rawcliffe, Carole, Roger Virgoe, and Richard Wilson, eds. “Counties and Communities: Essays on East Anglian History: Presented to Hassell Smith.” Norwich: Centre of East Anglian Studies, University of East Anglia, 1996.

My apologies for being absent for a few weeks. I needed the time to finish the latest Dr Adam Bascom Norfolk mystery, “A Shortcut to Murder”, which is now available from Amazon to read on Kindle. You can use this link to take a look.

Independent researcher and author of mystery stories set in Georgian Norfolk.
View all posts by William Savage →
This entry was posted in C18th Norfolk, Commerce, Georgian Society. Bookmark the permalink.

5 Responses to The Path to Landed Gentry Status