The Medical Free-for-All that was Georgian Britain 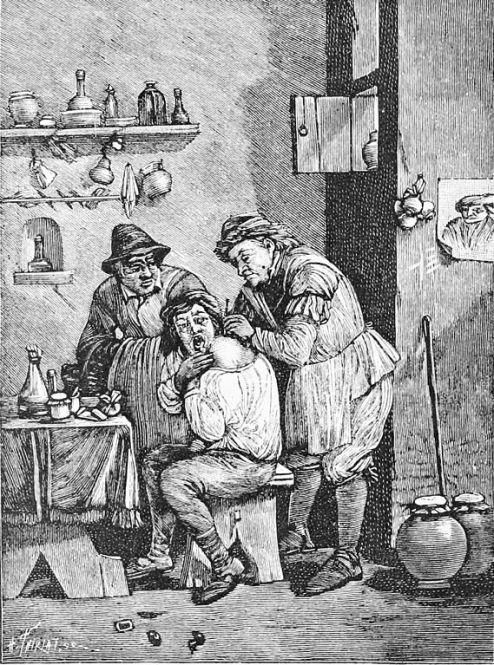 It’s easy to assume that the treatment options open to people in Georgian times were prescribed by income and social class. This is incorrect. Naturally, in such a laissez faire era, the richer you were, the more choices were open to you at any given time. But that didn’t mean the wealthy always got the best treatment, while the poor made do with folk nostrums and self-help. It was much more complex than that. There were situations in which the poor were treated by some of the most famous doctors of the day, either pro bono, paid for by charities or under the Poor Law. Equally, some of the highest in the land resorted to folk remedies and local horse doctors.

‘Scientific’ medicine had no obvious advantage in terms of effecting cures until the second half of the nineteenth century.

Let’s be clear. None of the options, from the best scientific ideas of the time to the grossest ‘snake oil’, had any clear advantage in terms of efficacy. In broad terms, nothing worked all of the time. Everything failed as often as it succeeded. ‘Scientific’ medicine had no obvious advantage in terms of effecting cures until the second half of the nineteenth century. Many people in the eighteenth century held the rational belief that all doctors would kill you, but some charged more for the privilege than others!

It was foolish to surrender yourself entirely to the ideas and ministrations of any practitioner, orthodox or not. Since any treatment might well prove ineffective, the wisest course was to keep your options open; to ‘shop around’ in a search for something that could prove better. Even the wealthiest people sometimes rejected expensive physicians in favour of folk-healers, and orthodox treatments for nostrums peddled by fashionable quacks.

On paper, the hierarchy of university-trained physician, apprenticeship-trained surgeon and practically-trained apothecary looked neat. It rarely worked like that, especially outside London.

During the eighteenth and early nineteenth centuries in Britain, there were virtually no legal or formal controls on medical practice. The professionals of the Royal Colleges had mostly failed in their attempts to enforce a ‘closed shop’ in favour of their members, even in the capital itself. Since their main motivation was financial, not medical, that was hardly surprising. On paper, the hierarchy of university-trained physician, apprenticeship-trained surgeon and practically-trained apothecary looked neat. It rarely worked like that, especially outside London.

In rural areas, who counted as a doctor, even amongst the wealthy, depended on who happened to be available, qualified or not. Country physicians might earn less than a tenth of the fees of their city colleagues, especially the London ones. Even to achieve that would involve taking on every case that was offered, including treating the very poorest at the charge of local charities or the Overseers of the Poor. Apothecaries increasingly left their shops and set out on horseback to take their medicines and advice to people in their own homes. It was far from unknown for people in need to turn to the local ‘horse doctor’. One traveller needing medical help was told:

…that there was no one who could do it, but a Man that lived three miles off, who was a good Physician, bled every Man, and Calf, in the neighbourhood, and was a pretty good Surgeon, for he had been originally a Sowgelder.

Quacks of all kinds abounded, many offering the most outrageous claims for their expertise and success — most often involving royalty safely located in foreign parts!

DR. BRODUM, Physician and Oculist, from No. 9, Albion-street, Black-friars-bridge, London where he has practiced the Art of Physic for many years with the greatest success, which can be testitied by letters in his possession from the first nobility belonging to the Royal Family; and is sufficiently proved by the extraordinary cures that appear in the London and country papers; far greater demonstration of his professional ability than can produced by any parade of language. … The Doctor to be consulted every Thursday, Friday, and Saturday, Mr. Bracey’s Looking Glass Warehouse, near Gurney’s Bank, Norwich; and every Monday, Tuesday, and Wednesday, at Mrs. Hunn’s, No. 18, King-street, Yarmouth.
Advice (Gratis) to the Poor, to the number of Thirty. (Norfolk Chronicle, November, 1793)

Even ‘wise women’ and local rituals might be tried, along with various magical chants and incantations. What mattered was not where the cure originated, but whether it worked.

Often the most trusted source for medical advice was simple personal recommendation. Georgian letters are full of helpful tips for dealing with illness, as well as reports on the progress of cures the writer has been trying. One correspondent, faced with his whole family sick with some disease he could not recognise, turned to an unconventional source on the basis of local reports.

Hee being by profession a Horse-Smithe and keeps a shop in our Town. Butt hee having practised upon many others about us, before we made use of him, the success his Phisicke hath had in our Family, hath much encreased his fame, and really I think nott without desart; for he gives you as rationall an Accompte for what hee doth, as any Phisitian that I ever yett mette withall.

Amongst recipes for nostrums, there could well be little notice taken of the species of the sufferer:

The following receipt is said to have produced the happiest consequences in curing the bite of a mad dog, without using the salt water. Take of rue, garlick, Venice treacle[1], and the scrapings of pewter, each four ounces; put them into seven pints of spring water, and simmer all over a slow fire, till it comes to one pint. Strain it, and give three spoonfuls every three hours to a man or woman, keeping them warm in bed. What remains after the straining is to be applied to the wound as a salve. – For a horse or cow, use double the quantity of ingredients, and give fifteen spoonfuls as above. – For a hog, sheep, or dog, give five spoonfuls. (Norfolk Chronicle, February, 1782)

Caroline Powys, an Oxfordshire lady in the mid–1700s, was careful to turn only to medical men she knew socially. This included both physicians and apothecaries. On one occasion, when her son-in-law was ill, she made sure the apothecary best known to her undertook the treatment, even though that meant him travelling from Oxfordshire to Southampton. “We thought,” she wrote, “Mr Powys taking the apothecary who he had a high opinion of was the best thing we could do.”

A wide range of shopkeepers, from booksellers to grocers, sold patent medicines, including many containing powerful narcotics and opiates. The newspapers of the day were full of advertisements for them, most claiming to cure a bewildering range of unrelated conditions.

Here are just two from one edition of the Norfolk Chronicle (Saturday, April 5, 1783):

Another very extraordinary CURE, Perfected with the GUTTA SALUTARIS, or ROYAL ANTI VENEREAL, DIURETIC, VEGETABLE DROPS, A Safe and speedy Cure for all Scorbutic and Venereal Complaints, Ulcerated and Swelled Legs, Bilious Disorders, in the Urinary Passages, &ce. … Likewise Dr. FREEMAN’S GRAND RESTORER or HUMAN NATURE, for Nervous and Debilitated Cases, commonly called FOTHERGEL’S CHYMICAL NERVOUS CORDIAL DROPS, in bottles 10s. 6d., 7s. and 3s. 6d. each. Of the above J. Croufe may also had the following Medicines of the late Sir JOHN HILL :

I. Essence of Water Dock, for the cure of the scurvy, leprosy, and all other disorders. This excellent medicine has at all times been allowed be the most certain, perfect; and lifting cure, for all scorbutic cases, notwithstanding they be ever so inveterate, price 3s. a bottle.

II. Tincture of Centaury. Being fine stomachic cordial and enlivening medicine; it gives a healthy appetite and sound digestion, it strengthens weak stomachs, and never fails to cure loathings, reachings [retchings], and sickness after meals, price 3s. a bottle.

Everyone did it. Eighteenth-century diaries and household books were full of various ‘receipts’ for treating common illnesses. John Wesley, the founder of Methodism, was a staunch believer in self-medication. Indeed, he was so sure of his ability that he often acted as physician to various members of his flock. Horace Walpole similarly saw physicians as useless. “I would not see a physician at the worst,” he wrote, “but have quacked myself as boldly, as Quacks treat others.”

Here’s Mrs Powys again, describing what she calls Mrs Floyd’s remedy for a cold or hoarseness:

two oz of Kidney suet of a weather Sheep shred very fine, put it into a pint of Cold Milk, let it boil a good while, then strain it thr’o a Lawn Sieve, take a few large spoonfulls now & then stirring it, always take some going to Bed.

Newspapers were a constant source of medical advice for whatever illnesses were the most prevalent at the time. In 1757, Thomas Turner, a grocer from Sussex, noted:

Read part of The Universal Magazine for June, wherein I find the following receipt recommended (in an extract from Dr Lind’s Essay on the most effectual means of preserving health of the seamen in the Royal Navy) as a specific against all epidemical and bilious fevers and also against endemic disorders.

He then goes on to copy the receipt carefully into his diary for the day.

Those who could might also keep a copy of a suitable ‘home doctoring’ book to hand, such as William Buchan’s Domestic Medicine (1772). Buchan’s book also contained stern warnings against certain folk remedies:

Many attempt to cure a cold, by getting drunk. But this, to say no worse of it, is a very hazardous and fool-hardy experiment.

I’ve known people who are still trying that ‘cure’ today!

Self-help meant more than trying different treatments or none. It meant you still had options, right up to the last. It was as much a duty to yourself or your loved ones as anything else.

The Georgian attitude to medicine was much like their attitude to life in general. Given that the most common outcome of all medical treatments available at the time was failure, it was up to the person suffering the sickness, or their family and friends, to stay in control. To keep trying alternatives until one worked or the patient died. In medicine, as in the world generally, all that mattered was success. To hand yourself over fully to one particular course of treatment, or one practitioner, was to ensure that, if that failed, disaster must follow. Self-help meant more than trying different treatments, or none. It meant you still had options, right up to the last. It was as much a duty to yourself or your loved ones as anything else. You paid, so you retained the power to dismiss, refuse or accept what you were paying for.

Doctors were typically treated with respect, but their authority was not accepted in every case. The doctor and patient relationship was at least as dynamic and fluid as it is today — maybe more so, given that our Georgian forebears were as yet free of the modern belief in the power of science to produce miracle cures.

Author of mystery stories set in Georgian Norfolk.
View all posts by William Savage →
This entry was posted in Medicine & Science. Bookmark the permalink.