Of Popinjays, Fops and Macaronis 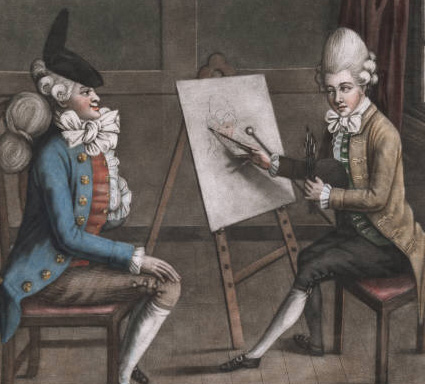 Originally, the word ‘fop’ simply meant a fool. However, by the 18th century, its meaning had narrowed to mean a fashionable man who put on airs and graces. A man who tried to portray himself as more refined, more witty and more socially important than he was, mostly by overdressing and aping the latest trends in fashion. To be a fop was to join a subculture, a kind of club, of those who wished to mark themselves out as special. Like the languid young men of the 1920s and 30s, the fop hung around the edges of the theatrical and artistic worlds, avoiding work and seeking to exist on his wits and a suitable private income, perhaps provided by a marriage of convenience to an heiress or a rich widow.

The fop is a standard figure of fun in a good many theatrical performances of the times.

With his outrageously elaborate clothes and attention to every passing trend and nuance of fashion, the fop was ridiculous and often pathetic. The fashions worn by mid-century fops would be described in today’s terms as ‘camp’ in the extreme, as would their habit of speaking with a fashionable lisp. People of their own time—especially moralists—branded them all as effeminate. Yet I don’t think we should jump to the conclusion that dressing as a fop always advertised a man’s sexual orientation. As we shall see, there were many other factors at work.

For men to dress splendidly was nothing new. Mediaeval nobles wore rich robes and magnificent jewellery. At the court of Queen Elisabeth I, displays of grandeur began with the queen herself. While the ladies might need to take care not to rival, let alone outshine, the monarch’s dress, for a man to appear in all his finery could be seen more as a compliment to his queen than an insult.

With the example of Louis XIV just over the Channel, Charles II could not afford to ignore the obvious link made between fine dress, wealth and power.

The Civil War had introduced Puritan plainness, but the restored King Charles II was no slouch when it came to dressing in the fashions of the day. Then, as now, Paris was seen as the source of all that was fashionable, closely followed by the cities of Italy. It was not surprising that the growing numbers of young Englishmen finishing their education and acquiring ‘polish’ via The Grand Tour saw dressing and behaving in the latest continental styles as a good way to advertise a new-found sophistication.

The ‘Club’ of Grand Tourists

The name ‘Macaroni’ began as a comically Italianate term for young men who had been on ‘The Grand Tour’ and came home dressing and acting as if they were still in Italy. In 1699, when the young Ashe Wyndham of Felbrigg Hall in Norfolk returned from his Grand Tour, Humphrey Prideaux dismissed him as:

“… a young gentleman of a very considerable estate in this country, but, having had an Italian education, is all over Italiz’d, that is an Italian as to religion, I mean a downright atheist; an Italian in politics, that is a Commonwealthsman; and an Italian I [have no] doubt in his morals, for he cannot be persuaded to marry. He is … of a tolerable good understanding and an estate of £4,000 per annum.” 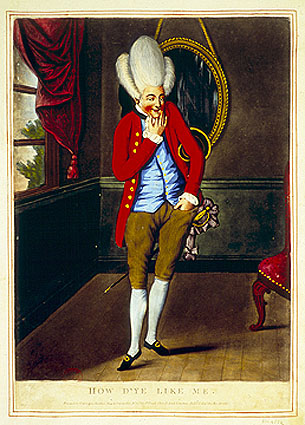 Macaronis wore a ‘uniform’ based on tight breeches and flowered, brocaded waistcoats with elaborate buttons, trimmed with lace; skirted coats of satin or velvet, also trimmed with lace; a ruffled shirt and a neckcloth. They also wore high-heeled shoes, elaborate Italianate wigs and sometimes small hats perched on the side of the head. Accessories might include a gold or silver-topped cane, a ‘quizzing glass’, a small sword, a muff and a heavily decorated snuff-box. Of course, being so refined, they could not tolerate the everyday smells of the time, so they would either carry a posy of scented flowers or pin one to their waistcoats in a prominent place.

These popinjays (a name for a parrot), fops and macaronis all used foreign styles of dress and manners, so they excited a good deal of old-fashioned, English xenophobia. Think of the hilarious Flanders and Swann song, “The English are Best”. It contained these memorable lines, perfectly capturing an effortless English contempt for the rest of the world:

“The Germans are German, the Russians are Red
And the French and Italians eat garlic in bed.”

Compare that to these words from The Oxford Magazine in about 1770:

“There is indeed a kind of animal, neither male, nor female, a thing of neuter gender, lately started up among us. It is called a Macaroni. It talks without meaning, it smiles without pleasure, it eats without appetite, it rides without exercise, it wenches without passion.”

Sexual slurs were the stock-in-trade of moralists and satirists. It wasn’t surprising fops and macaronis were branded as effeminate homosexuals.

The mid to late 18th century became obsessed by definitions of ‘manliness’ and a fear of the supposedly growing effeminacy of the upper classes. Italians and Frenchmen had long been assumed to be the source of all vice and sexual perversion. They might be fashionable, but their morals were well-known to be a far cry from solid English virtues. They were Roman Catholics too! It was one thing to acquire a proper appreciation of the fine arts and classical civilisation by touring Europe, but quite another to bring home foreign manners like a lingering infection. The ‘French pox’ wasn’t that country’s only gift to unwary English travellers.

“A coxcomb, a fop, a dainty milk-sop;
Who, essenc’d and dizened from bottom to top
Looks just like a doll for a milliner’s shop,
A thing full of prate and pride and conceit;
All fashion, no weight;
Who shrugs and takes snuff, and carries a muff;
A minnikin, finicking, French powder-puff. 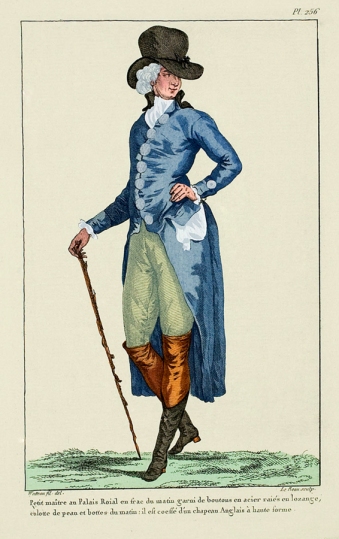 Since the nobility and gentry no longer needed to engage in personal combat on the battlefield, a gap had appeared in the definition of what entitled them to act as the natural leaders and rulers of the nation. In place of martial prowess, ‘politeness’ had become central to determining who was a member of the ruling elite; a carefully constructed mode of manners and conduct based on a classical education, refinement of taste and proven ability in the art of conversation.

It was agreed that such refinement was best shown in the company of women brought up to be the wives and mothers of gentlemen. However, too much feminine contact might also lead to effeminacy. The parents of aristocratic youths spent vast sums on sending them to France and Italy to acquire polished manners and language skills. Imagine their horror if any of their sons came home displaying ‘an effeminate and unmanly foppery’.[2] Such ‘degenerate’ traits were intolerable. You could not expect the right degree of unthinking deference, if your sons provoked mirth and derision amongst the lower classes by their dress and manners.

Fops were seen as indicators of moral and physical decline amongst the upper classes.

The growing emphasis on sporting prowess and ‘manly’ pursuits like fox-hunting and shooting, rather than spending time in the salons of London or Europe, arose in large part as a reaction against the kind of languid effeminacy and exaggerated sensibility the fops represented. Add to this upper-class fears of the spread of French revolutionary ideas in the political sphere and you have all the necessary ingredients for a sustained backlash.

I’ll end by quoting a verse from an 18th-century ballad, taken from the third act of a play called The Modern Prophets. It sums up perfectly the mingled contempt and disgust of their contemporaries for these 18th-century aesthetes:

“I hate a Fop that at his Glass
Stands prinking half the Day,
With a sallow frowsy olive colour’d Face,
And a powder’d Peruke hanging to his Wast,
Who with ogling imagines to possess,
And to show his Shape does cringe and scrape,
But nothing has to say;
Or if the Courtship’s fine,
He’ll only cant[3] and whine,
And in confounded Poetry,
He’ll Goblins make divine;
I love the bold and brave,
I hate the fawning Slave,
That quakes and crys,
And sighs and lyes,
Yet wants the Skill,
With Sence to tell,
What ’tis he longs to have.”

Independent researcher and author of mystery stories set in Georgian Norfolk.
View all posts by William Savage →
This entry was posted in Fashion, Georgian Society, Uncategorized. Bookmark the permalink.
%d bloggers like this: