The Cost of 18th-century Lighting

This is by way of being an addendum to my last post about lighting in Georgian times. That explained how dim Georgian lighting must have been, compared to the levels of illumination we take for granted today. I also need to explain how expensive lighting would have been in those days.

Rushlights were the cheapest form of lighting. Each was made by repeatedly dipping the ‘pith’ from inside a rush in melted animal fat (tallow), slowly building up the layers until you had something like a thin candle. Then you placed it in a special kind of holder, which often held it at an angle of around 45º. Finally, you lit the rush ‘wick’. The light output would have been little better than a single modern match. It was also smelly, the fat spat and dripped and the flame guttered. However, if you could afford no better, it provided some light. Since the holder exposed both ends of the ‘candle’, you might—in an emergency—increase the illumination by lighting both the top and the bottom. However, ‘burning the candle at both ends’ was going to exhaust it rapidly, hence the use of the expression for people who sit up too late and live too fast. How long would a rushlight burn? Maybe 15–20 minutes at the most.

Of course, making lights in this way required a good amount of tallow. Poor people wouldn’t be able to eat meat as often as their wealthier neighbours, so they must soon exhaust their own supply of this commodity. Then they had to buy more from the tallow chandler, probably stuff of the cheapest kind.

If you could afford a little more

The next best candles were far better made, with proper wicks. However, they still used tallow as the ‘fuel’. In wealthy houses, they might be made in-house and used for everyday purposes. Certainly they would be the only form of lighting given to the servants. A servant’s agreed terms of employment might include a daily ration of one or two candles, mostly to allow them to find their way to bed and undress when they got there. The more senior the servant, the larger the allowance.

At a time when a pound (weight) of cheap candles cost sixpence, you could get ‘dead drunk’ on gin for twopence!

Even the best tallow candles still smelled unpleasant. Tallow from pigs was avoided, since it produced black smoke and the strongest smell. Beef or mutton fat was much better, often mixed together.

All tallow candles were of an unpleasant brownish colour and needed constant attention once they were lit. The only way to lessen their tendency to sputter and smoke was to trim the wick every few minutes. Again, they lasted quite a short time, so you needed to restrict their use or face some large bills. In 1791, the Norfolk Chronicle reported the average price of all tallow for candles was 2s 6d (two shillings and six pence: 12.5p) for 8 pounds weight. By 1792, that price had risen to 3s 1d (16.25p). What were called ‘good dregs’(!) were only 6s – 7s for a hundredweight (112 pounds in Britain, approximately 50kg), while best ‘Russia tallow’ for candles was 47s – 49s for the same amount. Whether you would want any candles made with dregs, however ‘good’, is doubtful.

In museums and certain preserved homes of the period you can see metal cylinders used as candle-moulds for tallow candles. However, the quality of a tallow candle depended most on the fat used. The better and more refined the fat, the firmer and less smelly the candle. That’s why the skills of making the longest-lasting, least smelly kinds was valuable, as was the knowledge of rendering (refining) the fat correctly to remove the most impurities. Both were vital trade secrets to the many tallow chandlers of the time.

The government started taxing candles in 1709, further increasing their cost. They even tried to place legal restrictions on homemade rushlights. These would only be free from tax if they were “not for sale, of small size, and only dipped once in, or once drawn through, grease…” The candle tax was raised regularly, as such taxes tend to be, so that Adam Smith, writing in 1776, noted:

“As all those four commodities [salt, leather, soap and candles] that are real necessaries of life, such heavy taxes upon them must increase somewhat the expense of the sober and industrious poor, and must consequently raise more or less the wages of their labour.”

Mary Johnson, in her book on household management of 1775, suggested a family of the middling sort would need to buy some two and a half pounds of [probably tallow] candles per week on average. More in the winter, of course, when days in Britain are short; fewer in the summer. The cost of this she estimated as 1s 3d: i.e. about sixpence per pound of candles. To pay for that amount of lighting would be well beyond the reach of labourers or poorer artisans. They would need to economise on light and cost by using rushlights whenever they could.

What the rich used 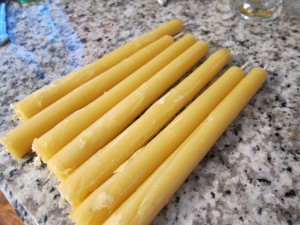 Beeswax candles were the best and longest lasting kind, but only the rich could afford to use them, especially after they were taxed at eight times the rate of tallow[1]. Even the most prosperous gentry used as few of these wax candles as possible, save on grand occasions when they wanted to impress. Lighting a candle was tantamount to burning money. Our expression that ‘the game’s not worth the candle’ comes from the observation that playing a card game that was dull, or for very low stakes, would not be worth the cost of the candles needed to be able to see your hand. Even the perk of having the wax candle-ends was highly desirable. They were typically reserved for the senior servants, who would sell them.

To be a fashionable host or hostess amongst the beau monde of the 18th century could be ruinously expensive.

Even so, some of the truly rich used wax candles with abandon. A grand dinner, a ball or an assembly might cost far more in candles than you paid for food and drink. The yearly wage for a housemaid at the time was some £3.00, but in the 1760s, the Duke of Newcastle paid £25.00 every month for wax candles to light his London house. On one occasion in 1731, the first Prime Minister, Sir Robert Walpole, had 130 candles lit in the hallway at his grand mansion, Houghton Hall in Norfolk, with another 50 in the saloon. The amazed guests counted them to be sure! The overall cost for his single night of extravagance was £15.00, yet that was a comparatively meagre compared with others. In 1712, the Duchess of Montague was supposed to have paid £200.00 for candles for an assembly lasting one night; and it was claimed the Duke of Bedford illuminated an event of his with 1,000 wax candles, at a cost of £603.00!

Naturally, lesser mortals were content with far less lighting in their homes. However, the precise amount could still be a subject of contention. The Overseer working for William Byrd, who lived near Williamsburg in the American Colonies during the 1770s, complained of his candle allowance. Byrd replied thus:

Then as to your being often forct, like mad people, to sit in the dark without a candle, I have this to say, that orders have been given from the beginning, to furnish you with one every night, and if those orders have at any time been disobeyd, upon the least complaint from you, that grievance too would have been redresst. But I understand the candles are not big enough for you. I am sorry we have not wax or at least mould candles to light you in your lucubrations[2]. Had your Dear Friend Mr. Stevens supplyd us with more tallow, perhaps we might have been better able to light up the House with bigger candles. In the mean time, if such as you have by the judgment of two good men would burn an hour and a half, that is full long enough to read by candle-light, which is not good for the eyes, and after that meditation and devotion might fill up the rest of winters evening.[3]

After 1750, candle-making technology gradually improved—but at a price. The use of spermaceti wax candles (a wax and oil retrieved from matter in the heads of sperm whales), or the first oil-lamps, became a reliable indication of the prosperity of the householder. Spermaceti wax candles sold for around four pence per pound weight more than corresponding moulded tallow candles. That extra cost would quickly mount up, especially with the candle-tax added. Still, for those who could afford them, spermaceti wax candles were popular because they had no foul odour, did not soften in summer temperatures, and burned evenly.

The latest Ashmole Foxe mystery, “DARK THREADS OF VENGEANCE”, might well be for you. Set in Norwich in the 1760s, it begins with a mysterious murder, before plunging, through clashes within a dysfunctional family which threaten business collapse and a banking crisis, to an unexpected denouement by the edge of the River Wensum in the shadow of Norwich’s massive cathedral.

Independent researcher and author of mystery stories set in Georgian Norfolk.
View all posts by William Savage →
This entry was posted in Cookery & Housecare, Georgian Society. Bookmark the permalink.

6 Responses to The Cost of 18th-century Lighting