Posted on February 7, 2018 by William Savage 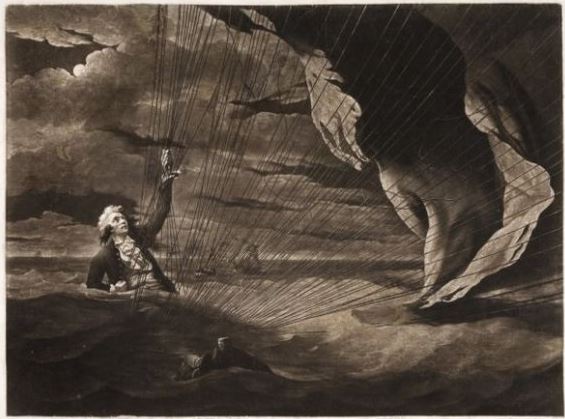 Contemporary engraving of Major Money in the sea.

We left Major John Money, the balloonist, on Saturday, July 23rd, 1785, up to his waist in water and convinced it was only a matter of time before his balloon sank and he would be drowned.

At first, he seemed tantalisingly close to rescue. He saw several ships and some smaller boats. One ship had followed his balloon for almost 2 hours, then gave up as it became fully dark. To make matters still worse, the sky clouded over and the darkness became ever more complete. In his own words, “Though he had not once lost his recollection, and had indeed possessed perfect presence of mind all the while, he now considered himself as a loss, and lamented that it was not his fate to die at once . . .”

Still, he had not given up all hope and continued to work on the balloon to try to keep what little gas remained so that there should be some buoyancy. His spirits were also raised when the clouds dispersed and the moon rose. Not only did this allow him to work on the balloon more easily, it “removed one source of additional horror which darkness itself always produces.”

However, he still seemed no nearer being saved:

For full five melancholy hours did the Major remain in this horrid situation, during the whole of which he had not once seen a vessel so near him as to be heard by his calling, and but in two instances did he even endeavour to be heard by them.

Then came what must have felt like a miracle:

About this time, nearly half-past eleven, though he had not for a long time seen any vessel even at the greatest distance, happening to turn his head on one side, he saw a boat very near him; he called to it, and to his inexpressible joy he was answered by the persons in it, who said immediately, “how many are there of you?” and soon after came up with him.

He was at this time so greatly fatigued, and his strength so much exhausted, that he was scarce able to get into the boat, and believes he could not have done it had he not been assisted by the people who came with it. The balloon was towed along with the boat, and the vessel to which it belonged being very near, he was soon put on board.

The ship turned out to be a Revenue cutter from Harwich, the HMS Argus, under the command of Captain William Haggis. They had been out looking for smugglers and had seen his balloon some time ago. Indeed, it turned out that they were the ship that had followed him for several hours, even sending out a boat to investigate more closely. Unfortunately, those in the boat decided that there was nobody aboard the balloon and returned to their ship with that message. Captain Haggis, however, decided to see for himself, and it was to this determination that John Money owed his life. According to the ship’s log, his rescue took place at exactly 11:30 PM, eighteen miles off the coast northwest of Southwold.

I’ll let Major Money close this story, as he was reported by the Norfolk Chronicle:

The cutter arrived at Lowestoft about eight in the morning, being Sunday the 24th, where the Major landed; he took a chaise at this place, and arrived at his house at Crown Point, near Norwich, at two o’clock, by which the anxiety not only of his immediate friends and connections was removed, but that of many thousand others who were spectators of his departure, and who had become very apprehensive for his safety.

The balloon received very little harm, except at the lower end of it, which the Major intentionally cut before it fell into the sea; the boat [balloon gondola] was however very much injured; they were both brought to Crown Point soon after the Major’s arrival.

Independent researcher and author of mystery stories set in Georgian Norfolk.
View all posts by William Savage →
This entry was posted in C18th Norfolk, Tid-bits. Bookmark the permalink.