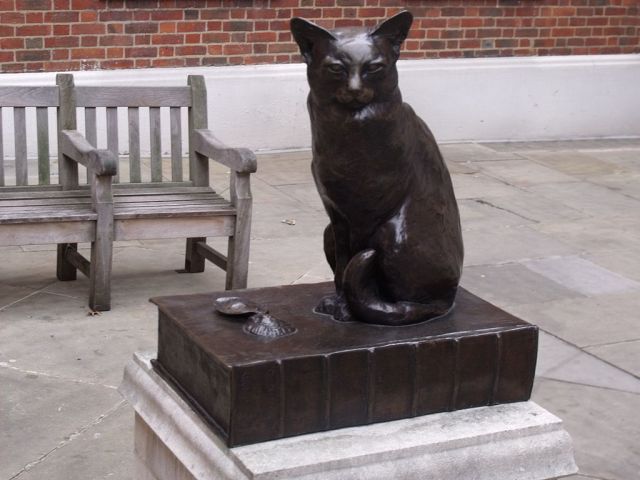 The eighteenth century is often counted as the beginning of the modern era. Many attitudes and customs, associated with the Middle Ages, were replaced by approaches that we recognise as closely akin to our modern ways of doing things. I’m going to focus on one of these — a change in attitude towards domestic animals as pets — with particular reference to cats and their association with significant figures in the literary world.

Cats had long been valued as working animals, dealing with the rodent population and therefore living in close contact with human beings. However, they were often associated with witches and could be feared. Perhaps it was because belief in witchcraft was slowly draining away, or because greater prosperity meant that people had more time to devote to turning an animal into a pet, but there’s no doubt that by the end of the 18th-century it was becoming quite usual to see a cat as a well-loved companion, as well as a useful animal in its own right.

Daniel Defoe, in his book “A Journal of the Plague Year”, said that there was hardly a home in London that did not have at least one cat. Many had five or six. And while some people at the time feared that cats might even carry the plague, we now know that their prowess in keeping down the rat population may have acted to limit the infection. It also seems to be around this time that the close association of love of cats with literary activities began in earnest.

Isaac Newton kept a cat in his rooms in Cambridge and fed it from his own dinner tray. Samuel Johnson’s cat, Hodge, is also well known. Here’s what Boswell wrote:

“I never shall forget the indulgence with which he treated Hodge, his cat: for whom he himself used to go out and buy oysters, less the servers having that trouble should take a dislike to the poor creature . . . I recollect him [Hodge] one day scrambling up Dr Johnston’s breast, apparently with much satisfaction, while my friend, smiling and half whistling, rubbed down his back, and pulled his tail; and when I observed he was a fine cat, saying, “why yes, sir, but I have had cats whom I liked better than this” and then, as if perceiving Hodge to be out of countenance, adding “but he is a very fine cat, a very fine cat indeed.”

The writer and philosopher Jeremy Bentham was also very fond of cats. He had one whom he called Rev John Langborn. Later, he conferred upon the cat the degree of Doctor of Divinity, so that he became the Rev Dr John Langborn. Eventually, the cat was knighted, and spent the rest of his days as Sir John. Here’s what Bentham wrote about him:

“I had a remarkably intellectual cat, who never failed to attend one of us when we went round the garden. He grew quite a tyrant, insisting on being fed, and being noticed. His moral qualities were most despotic — his intellect extraordinary; but he was a universal nuisance.”

Even the famous magician and quack, Katterfelto, had a black cat who was a vital part of his show of sleight of hand and natural curiosities; and Thomas Jefferson, the third US president, arranged for a pair of cats to be brought to him from Paris in 1790. Horace Walpole was another cat lover. The poet Thomas Gray composed a well-known poem on the death of one of Walpole’s cats, who was drowned in a goldfish bowl while trying to catch its inhabitants.

By the end of the century, it was generally agreed that cruelty to any animal was unacceptable. In fact, such cruelty was made illegal as early as 1648 in the US state of Massachusetts. The poet Christopher Smart, who declared himself “possessed of a cat surpassing in beauty” and called Jeoffrey, suggested that a pet cat could become “an instrument for the children to learn benevolence upon”. Indeed, it might well be said that by the beginning of the nineteenth century our society was well on its way to developing into a culture that sees no higher purpose for electronic communication than to share photographs of cute cats.

Independent researcher and author of mystery stories set in Georgian Norfolk.
View all posts by William Savage →
This entry was posted in Tid-bits. Bookmark the permalink.