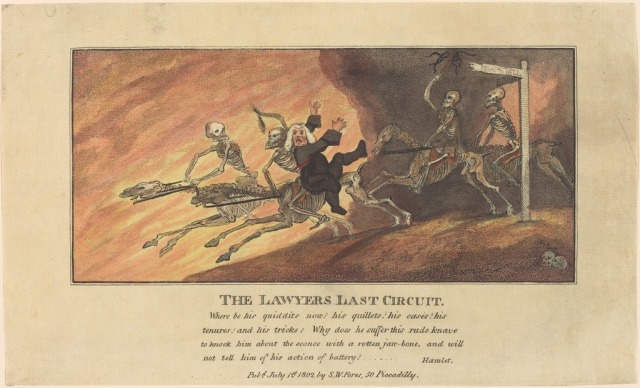 “He did not care to speak ill of anyone behind his back, but he believed the gentleman was an attorney.”

(A comment on an absent friend by Dr Johnson in 1770, as reported by Boswell)

The term ‘attorney’ in the eighteenth century could mean a number of things. Essentially, it meant a person who acted for or deputised for another, either in carrying out business or in some kind of legal action. This loose meaning survives today when somebody grants another ‘power of attorney’: meaning that the person thus appointed may act in every way that the person appointing them could. Now, as then, no legal training or standing is required. The basis for giving another person power of attorney is simply one of trust.

The ‘Man of Business’

If you imagine yourself back in the eighteenth century, a time when travel was difficult and slow, sending a letter might take days, and there was no form of electronic communication. It isn’t difficult to see that being able to appoint someone to act on your behalf might quickly become a necessity. Add to that the unwillingness of many of the gentry and nobility to involve themselves in the detail of the many business transactions arising from their estates and wealth and you have the perfect conditions for the formation of a profession, based on acting as the ‘man of business’ for several wealthy clients.

Entry to this profession was usually by serving an apprenticeship as an articled clerk to an existing, well-reputed attorney. You gained the knowledge and experience required — and proved your competence — by doing the work.

This term signified that the person in question had some degree of legal training, though not necessarily gained via one of London’s Inns of Court (the preserve of the barristers).

Given the increasing overlap between carrying out business functions and ensuring proper legal documentation and compliance, most country towns would require at least one legal practice; many, especially in towns some distance from the county town or a similar large conurbation, might have several.

“Well, let them say what they will … the profession of the law is a glorious one, it gives a man such opportunities to be a villain.”

A Road to Wealth and Status

In all these ways, eighteenth-century attorneys amassed considerable wealth. Sadly, lawyer in the eighteenth century were no better liked than they are today. The role offered too many obvious opportunities for corruption and private gain. Lord Shelburne, writing at the time, advised the wealthy to: . . . keep down the professions, whose employment is to rob every country, and if left to themselves, naturally produce upstart manner and yet a total want of principle.

In his view, attorneys prospered only because the wealthy found it too irksome or complicated to undertake business matters themselves. Many people suspected the complexity and slow progress of legal matters had more to do with the amount of fees that could be charged than anything else Lawyers could, it was believed, extract a plentiful ‘crop’ from even the simplest case, and were habitually portrayed as corrupt, confusing their clients by talking in jargon and making themselves rich by through constant use of the obscurities and technicalities of the law.

But all this is but picking,
With rest, pence, chest, and chicken;
It ever was decreed, sir,
If lawyers hand is fee’d, sir,
He steals your whole estate.

Such jibes at the legal profession have never gone away and jokes at the expenses of venal lawyers are widespread today. Still, this constant criticism of lawyers as crooks and mountebanks did bear some fruit. The attorneys, probably the most violently satirised of all lawyers in the eighteenth century, were the first to set up ad hoc system of self-regulation in the form of the Society of Gentlemen Practisers.

Many in the eighteenth-century were in no doubt the real power-brokers in the land were the lawyers. They knew people’s secrets and handled their business, while cloaking their activities in impenetrable jargon and esoteric legal terminology, all back up by the general public’s fear of becoming entangled in the Law.

“I have found by Experience – and, to use a common Expression, Woeful Experience it is! – that as soon as a Man initiates a Law-Suit, he becomes the Slave of those whom he employs; and the only Resource he has … is to exchange them [his lawyers] for other Tyrants.”

(“The Necessity of Limiting the Powers of the Practitioners in the Several Courts of Justice … In a Letter to … His Majesty’s Solicitor-General”
— A public letter of complaint by a dissatisfied litigant, 1774).

In fact, while corrupt practitioners undoubtedly existed, the constant legal disputes over property rights throughout the eighteenth and nineteenth centuries were caused mostly by the prestige and influence that was derived from land as a source of wealth, rather than industry or business. Fear of the law easily metamorphosed into fear and distrust of its servants, so that the rich and venal lawyer became the bogeyman for generations of merchants, traders and landowners of all types.

Independent researcher and author of mystery stories set in Georgian Norfolk.
View all posts by William Savage →
This entry was posted in Commerce, Georgian Society. Bookmark the permalink.
Loading Comments...
Comment
×
<span>%d</span> bloggers like this: